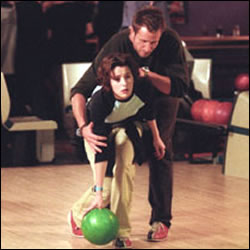 The episode begins with Andi being wheeled into Otter ward on a trolley. She is badly beaten up and suffering from amnesia.

Owen, a young child suffering from arthritis is talking with Janice when his mother comes to collect him. As she leaves, Janice tells Keri that she is unhappy with Owen’s mother’s overprotectiveness.

Owen’s mother (Maggie) is outside, setting Owen into her car when she suddenly cries out and slumps over, unconscious. Owen runs to Janice for help.

Meanwhile, Julie meets her ex-husband, Martin in the hospital shop. He tells her he has a new job in Holby and asks if he can see their daughter, Rosie. Julie refuses, although she reluctantly agrees to meet him later at the bowling alley after her night out with the rest of the staff.

Janice quickly realised that Maggie has had a heart attack brought on by angina and has her rushed inside by paramedics while she consoles Owen.

Andi refuses to be examined by Steve. When Victoria examines her, she finds love bites on her neck and begins to suspect that she had been raped. Steve warns her about jumping to conclusions.

On Darwin ward Jay Buyers (a patient) is making eyes at Sandy but Norman (another patient – one who runs a dating agency) points out to Danny that he thinks Sandy fancies him. He later suggests to Sandy that Alex could have a crush on her.

Victoria presses Janice to examine Andi for signs of sexual assault but Janice refuses, saying it would be too traumatic and that parental consent is required anyway.

After Maggie has said goodbye to Owen for one last time, Meyer operates on her. Unfortunately, she dies on the table, leaving Janice to break the news to Owen.

Liam appears on Darwin ward for the first time as an agency nurse.

Andi’s parents arrive but Andi – still without her memory – does not recognise them. Victoria explains her theory to them and they consent to the tests.

Janice discusses with a social worker, Pete Horton, whether or not Owen’s estranged father should be brought in although this was against Maggie’s wishes.

Later, Pete tells Owen that his father, Mr Lachlan, is coming to see him but Owen refuses, saying that he doesn’t know his father and runs off. Janice finds Owen hiding under a bed – he refuses to live with his father, saying that his mother would be angry. He asks if he can live with Janice.

Owen’s father arrives and tries to talk to him. Owen vaguely remembers “the man who took him to the zoo” when he was a toddler. Mr Lachlan tells Owen that he has a sister, but it becomes increasingly obvious that he is making no progress and Mr Lachlan storms out. He explains to Janice that his ex-wife blocked any attempt he made to contact Owen and that he now doesn’t feel ready to take on this responsibility, before leaving.

Pete tells Janice that Owen will have to go into foster care. Janice tells him she and Alistair once considered fostering and asks what the chances of them taking him on are.

Alistair arrives to pick up Janice and she explains the Owen situation. He refuses point blank, protesting that Janice has let her emotions cloud her judgement and that they wouldn’t have time to take care of him anyway. He tells her that he is afraid that taking on Owen will destroy their carefully built relationship.

At the bowling alley, the situation is dire. Requiring 9 pins to win the game for her team, Sandy bowled her first ball into the gutter and dropped the second on Danny’s foot. Alex takes her to one side and gives her a quick lesson. It pays off and she gets a strike. However, as the rest of the team congratulate themselves on the win, Sandy is left out of the celebrations.

As Julie goes to meet with Martin, Sandy asks Danny out to dinner. He turns her down and suggests she ask Alex instead. However, when Sandy looks for Alex, she finds him chatting up a blonde on the other side of the bar.

Julie tells Martin that she won’t let him near Rosie and walks off. He shouts after her that he won’t give up on trying to see her.

Andi refuses the examinations, as she now is able to recall what happened – she had sex with her boyfriend and was then hit by a car. Victoria tells her that she has to tell her parents the truth about the boyfriend.

Steve warns Janice that she isn’t prepared to take on Owen – she gets angry with him and storms off.

Owen refuses to go into foster care, saying he wants to stay with Janice.

Sandy tells Danny that she doesn’t have a crush on him, to Norman’s consternation and Danny’s relief and surprise (“Hang on, what’s wrong with me?” he asks). Jay gives Sandy some flowers for looking after him and she gives him a peck on the cheek.

Janice, still angry after her talk with Steve tells the Marshalls that they should pay more attention to their daughter, much to Mr Marshall’s fury.

Mr Lachlan returns, having changed his mind. Despite Owen’s continued protestations about wanting to stay with Janice, Mr Lachlan takes him home. Janice is left in her office sobbing.

Norman – (last name unknown, treatment unknown) revealed not quite to be the love doctor he made himself out to be.

> Anton Meyer: I try not to give up on my patients before I’ve even got them to the operating table.

> Norman: [on matchmaking and how much he can tell about a person just from their hair] Nurse Harper’s curls tell me she is bubbly and up for a laugh whereas Jay’s is straight as a die – like him, trustworthy.

Danny: Come on then, what about mine, what’s mine like?

> Sandy: [after being left out of the team’s celebrations on winning the bowling] Team hug, anyone?

Even to a casual observer, it is obvious that Janice became too emotionally involved with Owen. It’s ironic that Alistair was so worried about their relationship being brought down by Owen when he is the architect of its eventual downfall.

Although a lot of it is humorous and tongue-in-cheek, this episode probes into Danny and Sandy’s relationship fairly deeply.

When Fenisha’s life is in danger, Ethan must race against time to try and save his family. Meanwhile, Connie is determined to finally get...