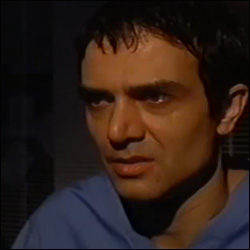 It’s the day after the charity auction and tensions are running high.

Today is also the day of the consultant interviews. Tash is a hot favourite to land the role but she must impress a member of the board and undertake a procedure that she has yet performed.

Pam and Mubbs are still continuing their flirting. Pam had previously bought Mubbs for her daughter Keri at the charity auction but it’s clear there is a spark between them, and Mubbs informs her that Keri took a raincheck on their date. Pam says they should monitor the situation.

However this is the start of a bad day for Mubbs when he misjudges a baby’s delivery. He ends up delivering the baby from the wrong position and ends up ordering a caeserean section. He tries to deliver the baby three times and during this period the baby was starved of oxygen.

Things are going better for Tash. She manages to perform the procedure without a hitch and with the remaining member of the board impressed she looks set to be offered the position.

Mubbs procedure has not gone well. The baby’s condition is precarious and the baby’s father, Dominic, holds him fully responsible. He gets called into Pam’s office where Owen is waiting to confront him. he tells Mubbs that the validity of the father’s complaint rests with how long it took for Mubbs to realise his mistake. Mubbs tells them he tried to deliver the baby twice but this is obviously not true which Lisa knows.

Owen sends them away to write up their reports and Lisa tells Mubbs she knows he tried three times and will have to include it in her report.

Pam goes to speak to Dominic to defuse the tension but he holds Mubbs fully responsible and tells her that he will pay if anything happens to his baby.

Tash goes to speak to Mel before her interview. Mel tells her that she is suffering from a brain tumour and it will kill her within a year. She plans to go travelling and see the world. She tells Tash thanks for giving her the opportunity of talking to her, then leaves.

Mubbs gets called back into Pam’s office. Owen, having now read Lisa’s report and seen how Mubbs has tried to deflect the blame from the situation. He tells him that if Dominic presses ahead with the complaint he could be struck off.Mubbs asked Pam to help him, but she says all he can do is grovel to Dominic and hope he listens.

Mubbs apologies to Dominic for what he has done. Eventhough he doesn’t appear to listen, his baby’s condition improves and he concentrates on her.

Mubbs finally realises what he has done and that he has ruined the baby’s life.

Tash passes her interview and is offered the role of Consultant. She goes off to speak to Mel before she leaves the country. Mel thanks her for being so decent and is sorry that she messed their relationship up. Mel jumps into a taxi and leaves Tash all alone.

Lisa finds Mubbs alone and feeling sorry for himself.She tells him that everyone makes mistakes and that he will get over it. Mubbs tells her that he doesn’t think he can do this job anymore. Lisa says that she is going to get her stuff and give him a lift home. She leaves the room but mubbs does not wait for her, then he exits.

Tash heads back to the hospital to speak to Ric. she tells him of what Mel meant to her and how she could never love anyone like her again. Ric says that he will accept Tash’s resignation if that’s what she wants. Tash decides to leave Holby and jet off to be with Mel.

We find Mubbs back in Pam’s office. He tells her that he was selfish and that he had destroyed the baby’s life.She tells him that he should try not talking about it anymore tonight and that he will be alright in time. Pam plants a kiss on Mubbs, they separate, their eyes gazing into each others before moving into a long lingering kiss.