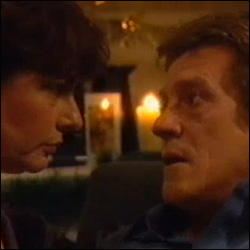 Tom’s in bed with a mystery woman, but Ed’s trying to get hold of him. A pair of lungs have arrived that are suitable for a transplant, and two brothers are potential receivers of them. The father hoped that one lung could be given to each brother, but the condition of one of the brothers (David) is so dangerous that David needs both lungs. Tom’s having family difficulties of his own, his dad keeps putting him down and is concerned about his brother being in prison.

Ric tells Terry that he’s too ill to get married in the registry office, and he may need to get married on the ward where Kath works! Terry asks Lisa to be maid of honour, but she says no on the grounds that her mother would kill her. Terry asks her to help him die if it comes to it, but Lisa is shocked and says she can’t.

Meanwhile, Chrissie is nervous about her forthcoming smear test and tells Lisa she has a pain in her tummy. Lisa does an ultrasound and reveals that Chrissie’s around six weeks pregnant. Owen comes in to check on her, but Chrissie tells him to go away – she’s not ready to share the news with him. She phones an appointment, and Ed overhears her and realises she’s pregnant. She says she loves Owen but can’t marry him if she could be carrying another man’s child.

The brother who is supposed to have the lung transplant refuses to accept it, he thinks that the younger brother deserves it more. Tom loses his cool and argues with his father, he obviously blames his father for not looking after his own brother properly, causing him to turn to drugs. The delay means that Jan gives the lungs to another hospital, causing Tom to bcome furious and he smashes up the theatre while a concerned Ed looks on. He says that Tom must call him if he needs someone to take him away from the bottle, but Tom says he has to go and meet his parents.

Terry and Kath’s wedding goes well, with both Sandy and Lisa acting as Maids of Honour. After the wedding, however, Ric and Diane speak to Kath and Terry and say that Terry only has a few weeks left to live, although Kath isn’t told this and Terry doesn’t want her to know.

Owen checks the history of the ultrasound and views Chrissie’s scan. He says he knows she’s pregnant, and asks Lisa why Chrissie hasn’t told him. He says he can’t understand why she lies to him, and Lisa says that if he doesn’t trust her then he can’t marry her. He confronts Chrissie and says he knows about the baby. He understands she doesn’t want a family, but asks her to think about it. Owen says that his feelings haven’t, and won’t change. But she’s not going to rush into any decisions anyway, she can’t get an appointment until next week at the clinic.

Tom meets his parents for a drink, and his dad offers him a drink in a bid for his forgiveness, but Tom refuses. Tom says it’s too late to show any concern now, for either him or his brother, the damage has already been done. There’s a sharp exchange of words, and Tom’s left alone with the drink (but he leaves the peanuts!). He downs the drink, and stands outside in the snow.

Terry tells Kath that he hasn’t got long, and asks her that if, when the time for him to die comes, she can help him go. They hug while the snow falls outside the window, holding each other tightly as they both sob.

David Reed, a 21-year-old with cystic fibrosis, he is about to get a lung transplant, but refuses, saying that his younger brother should get it instead.

Peter Reed, David’s younger brother, he is also suffering from cystic fibrosis, but can’t get the lung transplant, because it all take too long and it gets sent to another hospital.

Terry, comes for a check up because he is feeling sick all the time, his cancer has spread and there is nothing to be done.

Chrissie has stomach pains and when she checks what it is, she finds out she is pregnant.

[Ed is walking around the ward, while someone is trying to page Tom, who is lying in bed with a woman.]

[Kath and Terry are sitting on a sofa]

Terry: I didn’t want him to tell you… He thought you had to know. I haven’t got very much time… I thought I had time, to take care of what happens in the end, but… I’m sorry… The bitter the end, I can’t do that. I need help to get through it. I have to ask you. I won’t press it, but I need to know. If I’m right. If that’s something you just can’t do for me. When the time comes and I can’t go on, will you help me? Please….