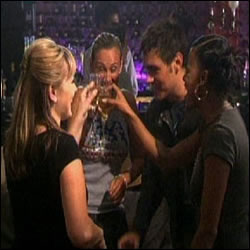 The episode opens with Jess running around her flat in the morning, frantically trying to get ready for work. The doorbell rings, and Jess answers it, finding, to her surprise, a (slightly dopey!) reporter looking for Sandy. The reporter informs Jess that Sandy won last Saturday’s lottery jackpot – over £150,000. Jess shoos the reporter away and runs into Sandy’s room. She finds the room bare – Sandy has packed all her belongings up and left. There are, however, a pile of letters addressed to her friends and colleagues. Jess opens her one, and finds a goodbye letter from Sandy, and £100! Jess is ecstatic!

Meanwhile, Ric is being harassed by Helen over the imminent department review. He seems highly stressed, trying to balance his morals regarding patient care, and his new role as Clinical Director.

In Maternity, Owen is discussing the prospect of going on holiday with his staff – the problem is, he doesn’t want to go alone. Mubbs and Rosie prepare to deal with a complicated delivery of a baby being born to Ginny, a HIV Positive mother. A mature student on placement, Rubinda, is working with them today. Mubbs wastes no time, flirting with Rubinda the moment he sets eyes on her, much to Rosie’s annoyance.

Chloe Palmer (16 year old daughter of previous patient, Sarah Palmer who died from a morphine overdose) is brought onto AAU, suffering from a swollen abscess in her thigh. Her grandparents are now her legal guardians, and they immediately bombard Lisa with questions, trying to ascertain whether or not Chloe has been taking drugs. Ric decides to operate later on that day to remove the abscess. The family are reluctant to allow Chloe to be operated on, but Ric convinces them that nothing will go wrong this time around….

Mr Riley, a highly stressed business man is brought into surgery after suffering excrutiating pain which was thought to be due to a ruptured appendix. Ric operates, finding cancerous lumps all over the man’s liver and removes part of his colon. He later tells the patient that his condition is terminal, and implies he has not got long to live.

Ric then takes Kath into his office for a word. He begs her to come back to work, “You’re the best nurse I’ve ever worked with, the hospital needs you…quite frankly, I need you”.

Kath agrees to return (provided the pattern of recent deaths is investigated), much to Kelly’s displeasure. Chrissie, however, is delighted! Tricia turns up on Keller with some files, which Kelly insists on sorting out, treading on Tricia’s toes somewhat. Chrissie remarks that her mother has been moody recently, and usually only acts like this if a man has messed her around. Tricia nervously assures her that this is not the case.

Lisa is horrifided to hear Kath is returning, and makes several bitchy comments to Ric. Ric accuses Lisa of deliberately sabotaging Kath’s hearing, and she walks away, making it clear she has no intention of making Kath’s life easy…

Chloe Palmer’s operation is going badly. Her leg is very badly damaged by repeated drug injections, and Ric’s suture breaks, forcing him to perform a saphenous veing graft to repair the damage. Ric finally gets things under control, and resumes his banter with Zubin. Ric is disappointed to see his friend disagrees with his handling of the Kath/Palmer situation. Zubin sagely recommends that Kath take some holiday leave until the affair blows over.

Back in Maternity, Ginny’s labour is not progressing well. Mubbs has to use a riskier procedure to deliver the baby girl, but eventually does so successfully. He still manages to flirt with Rubinda throughout the ordeal!

Chloe Palmer has finally stabilised, but unfortunately for Ric, he has missed his board meeting, in which he planned to support Kath. Helen is very displeased, and Ric struggles to show he is dealing with his promotion well. Ric seems more concerned with individual patients’ needs than those of the hospital as a whole.

Kath returns to Keller Ward, and Kelly begins to wind her up. Nic asks Kath to sign him off for one of his logbook skills, but she insists that she first see him complete the procedure. Kelly bitches about Kath, complaining that she is too concerned for rules.

Helen enters Keller, and sees Kath back at work. Ric stands up for her, but does he have the hospital’s best interests at heart?

Chloe Palmer is brought up to Keller, and Kath recognises the potential problems this could cause (Sarah Palmer died on Keller Ward) and attempts to relocate her elsewhere. Lisa refuses to offer Chloe a bed, claiming that AAU is too busy. She does, however, reluctantly offer her some union support, which Kath dismisses as “a bit too late now!”

After offering advice to Ginny’s partner, Zak, Owen is approached by Tricia, who returns his Liverpool boxer shorts and tells him she now realises that it was for the best they broke up. She acts very cool and detached, leaving Owen wondering if he made the right choice.

A delighted Jess runs up to Ric, hands him his letter (containing £50), and informs him of Sandy’s good fortune. Ric is thrilled for Sandy, laughing that she was the only member of staff who was poorer than him!

Ginny argues with Zak, then complains of dizziness. She suffers a massive bleed, and Mubbs immediately begins to help her. Rosie insists repleatedly that Mubbs follow procedure and wear extra protective clothing, but he arrogantly refuses, saying there is not time. Rosie shoves an apron on him, but cannot make him wear the extra gloves. After saving Ginny’s life, Mubbs plays up his role of “hero” and smugly smiles at Rosie when it turns out that none of Ginny’s blood seeped beneath his single pair of gloves. He implies Rosie is overly pedantic, and then resumes his flirting with a highly impressed Rubinda.

Rosie drags Mubbs into an office, and shouts at him until he apologises. She tells him to grow up, calling him “a stupid, bloody, arrogant….”. For a moment, it seems the pair will kiss, but she instead storms out, leaving Mubbs kicking chairs to vent his temper!

Mr Riley confesses to his daugher, Sophie, that his brother may be her biological father. His brother and daughter both refuse blood tests, but Mr Riley insists on knowing. Sophie storms away, leaving Mr Riley’s brother to remark that either way, he has lost everything.

Chloe awakens, realises she is not only in the ward where her mother died, but is also in the same room. She becomes hysterical, and Kath cannot calm her down. At that moment, Helen and Ric walk in. They see Chloe’s grandfather shouting about their poor treatment, threatening to call the press until he breaks down sobbing. Helen wryly suggests that Ric begin drafting a press statement and walks away.

Ric is furious with Kath for her handling of Chloe Palmer. She insists there was nowhere else to put her, and says she is not to blame. Ric clearly disagrees and suggests Kath take some unused holiday leave. Their friendship seems to be over.

Tricia approaches Owen again, this time to collect some files. Owen tells her he regrets his decision, and invites her on holiday with him. She keenly accepts, and the pair are a couple once again.

Ric asks Kelly to stand in for Kath, and she happily agrees to. Nic requests that she sign his logbook, but Kelly hypocritically refuses, insisting that the corect procedures must be followed. She sends her brother off to remove a patient’s morphine drip.

The Palmers make up, and Chloe agrees to return to the care of her grandparents.

Chrissie catches Nic unplugging the drip and is furious that an unqualified nurse was allowed to do the procedure, particularly after the Palmer fiasco. Kelly is perhaps not capable of holding the fort at Keller very well…

The day is finally over, and there is a celebration in the bar for Sandy. Jess, Lisa, Nic, and Kelly have all met up to open Sandy’s letters. Sandy has payed off Lisa’s mortgage (“The little angel!”) and given money to the others.

Nic tells the group that Sandy has dumped him, just when he planned to tell her that he was in love with her. She has gone off to Australia to try and make things work with Danny. Despite Nic’s disappointment, the others couldn’t be more happy for their friend.

They all raise their glasses and drink to Sandy.

Kelly – “To the one and only Sandy”

Mr Riley – Came in with a suspected ruptured appendix, diagnosed with terminal cancer.

Jess: Keys…. Where are you? I’m coming! Alright! One minute!

Jess: Illegedly. What does it have to do with you?

Journalist: I’m a reporter from the Gazzette.

Jess: Oh. What has she done?

Journalist: Nothing. Well, nothing illegal. Is she here?

Jess: No, I haven’t seen her for a couple of days. She’s probably at her boyfriend’s.

Journalist: Well, have you got the address?

Jess: Well, she won’t be there now, she’ll probably be at work.

Journalist: And where’s that?

Journalist: Please, I only want a couple of words an a snap of the happy winner.

Jess: Oh my god! How much? How much? Well, they don’t send any reporters about only a tenner!

Zubin: You talked to Kath?

Zubin: Ric, you did what you had to do for the hospital’s sake.

The song played in the opening scenes was “You And Me Song” by the Wannadies.

This was the last episode involving a storyline with the long-term character, Sandy Harper. The actress, Laura Sadler, who played Sandy was tragically killed several months earlier.