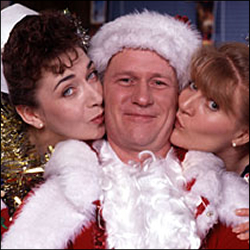 The team go for Christmas dinner at an Indian restaurant before their night shift. Josh and Jane are called out to a fancy dress party, and find a women, Helen, drunk and overdosed on pills. Sandra and Maxine give her a washout and Helen reveals she is upset that her boyfriend Rowland dumped her and paid her £500 to have an abortion. She discharges herself, even though Sandra urges her to stay.

Homeless runaway Suzie Brennan comes in saying she is ill to get shelter for the night. Maxine takes pity on her, but Rob is forced to make her leave. She says he will make herself ill. A battered wife, Doreen, fed up of being tormented by her alcoholic husband, Arthur, picks up a knife and stabs him in the chest, after he pushes her, hitting her head. As Josh and Jane take him to A&E, Suzie rushes out infront of the ambulance and is hit. Jane swerves and hits a lamp post. Suzie suffers a badly injured arm and has an operation to save it and she is pleased to see her estranged Dad, who has come to visit her. Arthur, on the other hand, has multiple chest injuries and dies. Doreen will be charged with murder. Their son, Len, tells Duffy of the years of abuse him and his mother have been through and it seems so unfair.

Josh comes to cheer up Jane , who’s in a cubicle with whiplash. Staff receive lots of presents, Duffy is surprised Andrew has sent Peter a present to the department. Maxine and Rob share a kiss in the staffroom and Duffy invites Charlie over for Christmas dinner. They kiss under the misteltoe. Ash goes to see Nikki in Birmingham.

* Helen Holloway – overdoes on tryciclix, given a washout.

* Suzie Brennan – 17 year old, after being discharged, she gets in the way of an ambulance, injuring her arm. An operation is needed to save it.

Duffy : Look if you fancied something to eat, I mean my Mum’s got a turkey that would feed this place and it’s only her, me and Peter.

Charlie : Are you sure she wouldn’t mind?

Charlie : Alright fellas? (to paramedics bringing in a patient)

* Presents received; Norma gets a CD – with the song ‘Take a pair of smiling eyes’, Rob – a water gun, Duffy – boxer shorts (intentionally for Julian). Rob also buys himself a gameboy.

* This episode is mentioned in ‘Charlie’s case notes’.