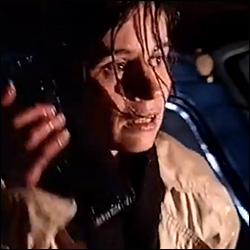 Severe winds hits Holby and the staff brace themselves for a busy night. Mark continues to push cutbacks onto Mike and Charlie, telling them they must lose a nursing post. Duffy is concerned with Norma’s recent attitude; Charlie takes her aside thinking she has a drink problem and tells her to go home. Mie Nishi-Kawa is brought in as a replacement. Project 2000 Nurse, Helen Chatsworth also joins the team, as well as cheeky porter, Frankie Drummer. Ash is still frosty towards Ken.

On her way to work, Karen comes across a car which has crashed into a falling tree; the man Jim is dead, and his semi-conscious wife, Maggie is trapped and injured, with their young daughter, Joanna, in the back crying. Karen phones for help, but paramedics Josh and Jane have trouble getting to the scene, in the weather conditions. Maggie dies, and when the paramedics finally arrive, Karen blames them, angering Josh.

Two teenagers, Billy and Kim, think there luck is in when a sign crashes into an electrical shop window, and try to loot some equipment. A policeman witnesses them and gives chase, but is hit on the head by a falling newspaper stand. Kim runs off, but Billy decides to take him in, in a shopping trolley.

Alcoholic, Gerry Whitmore returns home in an aggressive mood. He hits his pregnant wife, Linda, fracturing her arm – pushed to the limit, his teenage son, Nicholas, stabs him in he neck. At A&E, Nicholas tells DS Sally Dulton the truth, but Linda feels trapped in the middle of her father and son and Nicholas is taken into care.

Two builders, Jack and Malcolm, are forced to repair a roof in stormy conditions. Jack, however, slips and his leg plunges through the roof. Jane goes up a ladder to treat him but Josh saves the day when he gets a crane lift to help out.

Mike takes Karen aside to warn her about her attitude. Charlie and Ken go for breakfast after a busy shift.

Rain and windy, see tramp Mungo hidden in the boxes;

Mungo : And I saw another sign in heaven. Great and marvellous, seven angels having the seven last plagues, for in them is filled up the wrath of gods!

Nicholas : Can I just say goodbye to Mum quickly?

DS Sally Dulton : It’s not a good idea Nick, she needs to rest.

Mungo : On earth as it is in heaven, forgive us our trespasses. Amen amen.

Duffy : Come on Mungo, let’s go and see if we can get you a cup of tea eh?