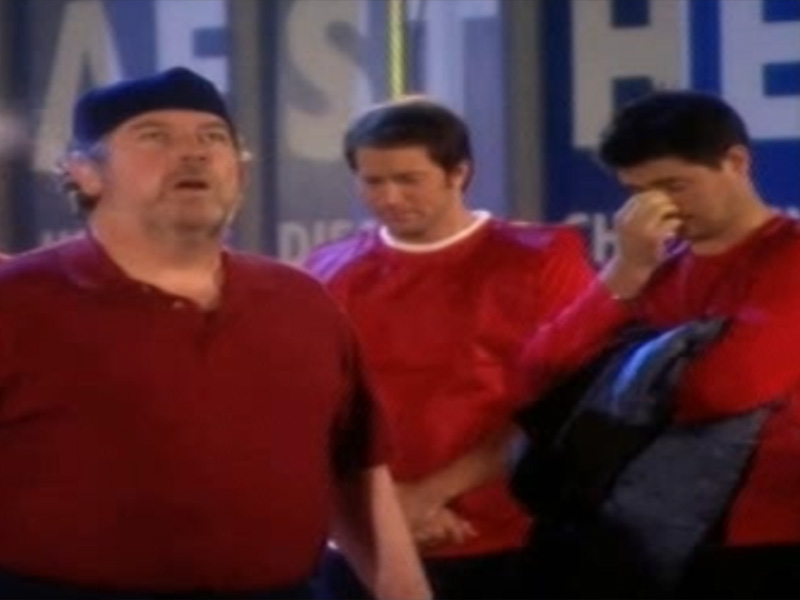 Elderly patient, Tom Gibson, is brought in with facial injuries. He claims to have fallen but his injuries look as if he’s been hit. Harvey is working on a police case on the ward – Rob Gibson, who happens to be Tom’s son. Kyla is suspicious and when Tom falls unconscious, she suspects Rob of giving him an adrenaline shot. Later Rob confesses to Kyla that he loves his father but has been abused by him.

Meanwhile Kyla and Harvey come to blows over the incident aswell as their differing ways at handling Max. An argument erupts in the toilets, unaware Max is also there – Kyla pushes Harvey and he punches her back.

Elliot overhears Martha making a call about deferring another year at University. After speaking with Martha, Mark tells Elliot she is staying in Holby to look after him and says he needs to prove to her he can cope on his own. Mark pushes Elliot into being involved in the 5-a-side charity football match between the surgeons and anaesthetists. Elliot doesn’t quite make the grade during the match but it gives him and Martha a chance to talk, where she reveals she is infact scared to go back to Uni and being on her own again.

It’s Donna’s last day as she plans to travel Australia with her remaining winnings. However patient, Malcolm, who comes in awaiting a hernia operation, tries to persuade her to invest some of her cash. Donna, Matt and Dean discover Malcolm has bi-polar disorder but he has made a runner with Donna’s cash from the safe. Donna finds him but not before he throws all her cash out the window. Staff outside collect the money to give to a former young patient at the charity event later in the evening – Donna attempts to retrieve her money but with everyone looking she is forced to let the charity keep her winnings. And when she also misses her flight, it looks as if she will be returning to Holby after all.

Dean suspects Matt has a new woman on the go – he’s right, but not aware that he’s infact dating Nikki again.

* Rob Gibson – minor injuries after being hit by car.

* When Dr Greene teases Sam and Joseph about the football match later, Sam jokes ‘Why do people become anaesthetists? It’s not cool, it’s not sexy and nobody likes you!’

* With Dean questioning Matt about his love life, Matt tells him ‘You’ve been watching an episode of Colombo in slow motion!’

* Showing Sam which position members of their team will be playing in, using hospital objects, he says ‘You are the syringe, I am the roll of tape!’. Sam questions ‘So who is the sepositary?’

* Elliot takes the final penalty to try and draw level. He’s trying to redeem himself from when he missed a penalty when he was younger but he misses again and breaks a window!