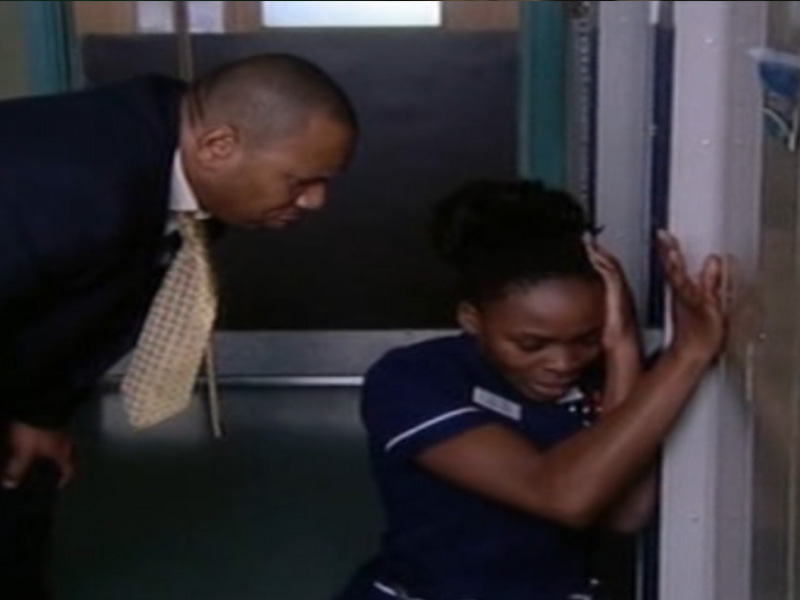 When Jac asks Dan if she can be involved in the pioneering remote robotic procedure that’s taking place in Holby he refuses, and Jac’s disappointed to learn that Diane is on the team. Lord Byrne and Dan get frustrated when the patient, Alan Simpson, withdraws his consent for the surgery but when Jac manages to get the op back on track (betraying Joseph and Elliot in the process), Lord Byrne rewards her with Diane’s place on the surgical team.

Later, everyone’s drinking in a hotel bar and Jac and Lord Byrne are clearly enjoying each other’s company. When Jac lies that she and Joseph are finished, Lord Byrne invites Jack to stay the night with him. In the morning, Jac gets dressed as Lord Byrne sleeps.

Lola is struggling to cope in a busy AAU – and it doesn’t help that Thandie’s still making mistakes. Irate Lola wants Thandie off the ward and Mark suggests that she tell someone in authority. Sutherland turns up and Lola lays into him about the chaos in AAU – but when he successfully overrules her decision to close the department to future admissions, Lola’s hurt by the lack of support from her team.

After another day of tension between Kyla and Harvey, Kyla decides to give her troubled boyfriend another chance.

A former cancer patient of Elliot’s, Rosie Pallister, is brought in after being in a crash. Elliot discovers the cancer has spread to her brain and she has little time left. However when she suffers a seizure, Rosie’s mother begs them to resuscitate her as she’s not ready to let her die yet. Rosie is then sent to ITU.

When Ben Thatcher is found trapped under rubble, he is brought in with serious injuries. Lola is not happy when Thandie misses his internal bleeding. Ben is dying, as his blood’s not clotting properly and he makes an emotional call to his wife to get to the hospital in time.

A mother, Ginny, smuggles heroin in her stomach and forces her young daughter, Amina, to do so too as they leave from Pakistan. Kyla is furious when Ginny shows no remorse saying she did it for the money.

* ‘She’s the best self publicist I’ve ever met!’ Dan on Jac.

* Jose Gonzalez ‘Heartbeats ‘ plays at the end of the episode.