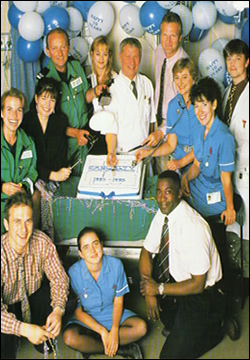 Casualty returned for it’s 10th series, with Corinne Hollingworth still at the helm, and fighting fit. With an influx of other medical dramas including Cardiac Arrest, ER, Chicago Hope as well as factual medical series’ such as Hospital Watch and 999, Casualty still proved itself to be a ratings winner.

Claimed by one paper to be ‘more sex than scalpels’, as well as the usual guest storylines, the series does see a turning point to see more of a focus on the character’s and their personal lives.

Derek Thompson said, ‘I think people like to know about the private lives of the staff at Holby.’ This series, it’s crunch time for Charlie and Baz this series after the affair deepens and her husband Peter Hayes eventually becomes aware of the situation when Baz gets pregnant – and he knows he can’t be the father as he’s infertile.

Baz and Charlie weren’t the only couple heating up the show; Mike and Rachel get back together after Mike’s failed marriage, an underlying sexual tension between Matt and Jude occurs and Ash falls for PR Officer Laura Milburn which gives Casualty it’s first ever screen wedding in the last episode. At last one happy series ending.

A few newcomers make their entrance for Casualty’s 10th milestone; SHO Daniel Perryman is young, confident but not quite as good as he thinks. Craig Kelly says, ‘He is still very likeable but he makes mistakes.’ With unrealistic expectations about his own abilities and dreams of becoming a sought after surgeon, Daniel’s charming façade begins t o crack when it dawns on him that this chosen career path is not an easy one.

For the first time, Casualty also bring in a PR Officer for Series 10; Laura Milburn, who is seen as a hindrance by staff and finds her only ally in Ash. ‘She is perceived as management but she sees herself as being a helpful person who wants to be part of a team,’ says Lizzy McInnerny on her character.

Incidents this series include an athletics stadium stand collapse, Eastenders star Letitia Dean appearing as the mother of a boy who has been involved in a hit and run, a Vicar who hangs himself after being outed and a bogus paramedic set out to cause trouble.

Although the final episode, which saw Ash and Laura marry, Casualty couldn’t help itself but to include a hint of doom; Kate’s husband Trevor falls down some steps outside A&E. A blow to the head sends him into a deep coma. Things aren’t looking good for him next series.

In this article:Cas Series 10, Casualty Series