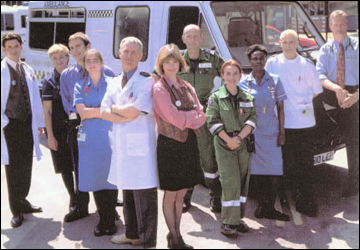 A number of new characters were introduced in Series 11. Pin-up Jonathan Kerrigan made his debut as Casualty second major gay character, nurse Sam Colloby. Popular with fans, Sam’s sexuality wasn’t much of an issue in the show. Nurse Gloria Hammond and SHO Richard McCaig also make an entrance with a tentative romance and mid-series new Consultant Jack Hathaway joins the team.

The opening episode started in dramatic style; a lorry explosion, the birth of Charlie and Baz’s baby Louis and Kate’s husband Trevor now in a vegetative state. It seems the trials and traumas of the medical team were again set to take centre stage.

One such case, was that of Josh Griffiths who in Episode 20 ‘Treasure’ received the worst possible call out a paramedic could take; to that of his own house. A house fire killed his wife and two children, leaving Josh permenantly damaged.

Charlie and Baz also had troubles with a nanny suffering from Munchausens’s syndrome and in an exciting who-dunnit to end the series; Jude is stabbed and is left fighting for her life. Matt, who left for Crete after Jude’s aborted his baby and feeling nothing was left for him in Holby, finds himself on an emotional journey back to Jude’s bedside.

In this article:Cas Series 11, Casualty Series