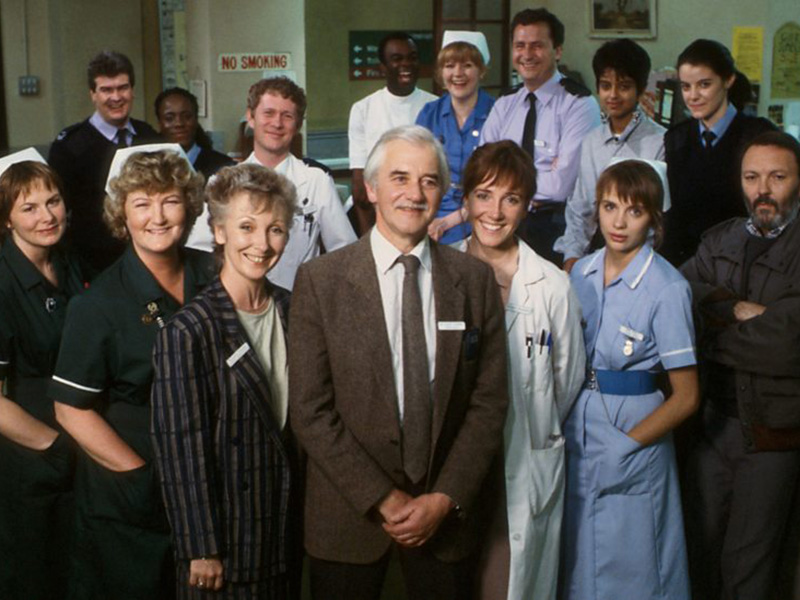 It pays to be prepared; if Casualty hadn’t already begun work on the second series, political controversy over the first series could have killed the show. As it was, with fifteen more scripts prepared – and, moreover, paid for – the BBC decided to continue. It also helped that a permenant place for the Set had been found and paid for in a Bristol warehouse – having previously been filmed in London.

However accompanying the newspaper publicity stories for the start on 12th September 1987, was the news that there would be no more programmes. Producer Geraint Morris was quoted as saying ‘We felt it should end on a high after thirty episodes’.

But as the hospital team battled to save their night shift, a quiter battle was being waged – and won – behind the scenes. Six weeks on air and there were no government complaints, critics were warming and following the show’s dramatic stabbing of paramedic Sandra Mute, audiences of more than 10 million seemed secure. All these things combined to give the kiss of life to the seemingly doomed show.

Perhaps what really saved Casualty, strange as it seemed then, was the first ‘baddie’. Elizabeth Straker was a tough but human administrator. She had frequent clashes with Ewart Plimmer, a love/hate relationship between the pair that was bound to end up with an affair.

Other character storylines included Duffy getting her first boyfriend, Peter Tranter, since her attack. He offered her an expenses trip to California. But a telephone call from Peter’s former lover informing him that she was HIV positive put paid to the plan. Discovering he also had the virus, he told Duffy, mistakingly believing that as a nurse she would take the news calmly.

During the series, there was an eerie example of life imitating art when viewers watched the team helping to dig out the dead and dying from the rubble of a house destroyed by an IRA bomb. Back at Holby, poor Irish Megan was blamed by an outraged relative. Only hours after the episode was screened, and IRA bomb ripped the heart out of Enniskillen. The writers were seen to have put their fingers on the pulse of the nation’s current problems without exaggeration. The show may still have been a red rag to some Tory bulls, but no-one dared call it far-fetched again.

In this article:Cas Series 2, Casualty Series