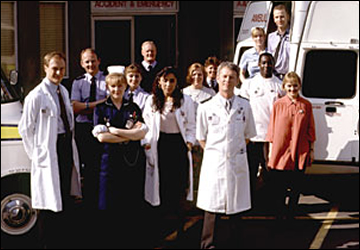 They predicted that Casualty would collapse without Megan. It didn’t. It grew up a bit more. Geraint Morris moved back into the driving seat. Geraint inherited some of the story ideas created by Peter Norris. Perhaps the most important of these ideas was the character of student nurse Kelly Liddle.

‘I knew that Brenda would leave,’ says Norris. ‘I honestly think she would have done so even if she hadn’t had her success in My Left Foot. She’d done five hard years and wanted a break. The nurses were the linchpins and so far almost all of them had been heroes. I thought we should see someone who fails.’ Kelly Liddle was destined to fail so completely that she committed suicide. But first the good news, Charlie survived the bullet wound in his chest. Little was said about it – Justas little was said about Megan’s absence – but devoted fans picked up a remark or two among the busy regulars. They knew both incidents had caused pain. Charlie was never again to be the cheeky chappie we first knew, and yet again his love life was t be awkward an unsatisfactory. He seemed to find his soulmate in Social worker Trish Baynes, but things never worked out when she became fed up of playing second to his hospital life. Duffy continued to survive motherhood, Staff Nurse Sandra arrived to the delight of her growing legions of male fans. The character of Ash was developed. He proved as sensitive as Sandra was sensible.

The doctors did not change this series. Mamta Kaash had become so popular as Beth Ramanee that Geraint broke his rule of reflecting the A&E turnover. The scripts had her wanting to move on into general practice and Julian, who’d come to respect the junior he once criticised so easily, urging her to stay. It also had her following the wishes of one terminally ill man and not prolonging his life. The result was months of stress when a charge of negligence ensued. Julian also wanted to move, but up not out. He used the old pals’ act to assist him in winning promotion to the new post of Casualty Consultant. An important newcomer was Norma Sullivan, a seemingly snooty receptionist who’d rather you bled to death infront of her than failed to give your correct details for her paperwork. Anne Kristen had such an impact in the role that hospital receptionists everywhere wrote in protesting furiously.

For the third year running the show was screened at9.30pm on Fridays. Many squeamish viewers had long since learned to watch parts of casualty with their eyes shut. But Morris was still urged by his medical experts to be explicit about injury. ‘They tell us that we must show the consequences of accidents, particularly those that can be avoided’

In the opening episode, Casualty screened an accident that had happened on a cliff top. Nigel le Vaillant, Cathy Shipton and Caroline Webster agreed to do their own stunts in a massive rescue scene high above the Wye Valley. After abseiling down 100 feet of rockface, Nigel’s character had to perform an amputation on a patient’s foot. ‘It was a piece of wood but it made me feel quite sick,’ he admits. By the last but one episode, 15.5 million viewers were hooked.

The final episode centered on an aircrash, a challenge for the designer Andrew Purcell. What no one spotted until they worked out on which Friday in December it was due to be screened was that it coincided with the third anniversary of the Lockerbie disaster. To avoid offending relatives of those who suffered, it was pulled off and shown the following February. Geraint and his team were disappointed. But not half as much as they were to be after the final episode of the next series.

In this article:Cas Series 6, Casualty Series