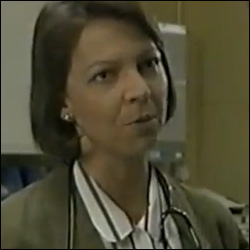 STORYLINE : A couple bring in their young baby in with a broken leg – it’s not the first time she’s been in. Pediatrician, Esther MaCauley arrives and abruptly calls a case of mistreatment, however Beth disagrees believing it’s brittle bones. Julian tells her that Esther has more experience, but behind her back, with Tony Walker’s encouragement, she gets a second opinion – Beth is proved right.