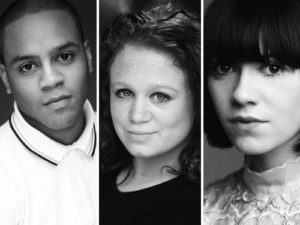 Three new Student nurses are set to join the ED Team in the New Year.

Actors Daniel Anthony, Amanda Henderson and Gemma-Leah Devereux have all joined CASUALTY and will make their debut in January.

Daniel plays the character of Jamie. He has made three previous guest appearances in the show (in Series 15, 21 & 26). His other TV credits include Eastenders, Doctors and A Touch of Frost, but he’s probably most noted for his role of Clyde Langer in The Sarah Jane Adventures.

Amanda will play the role of Robyn. Since graduating in 2009, she has appeared in some well received theatre roles, she has also appeared in Mount Pleasant as well as two feature films Wild Bill and Les Miserables.