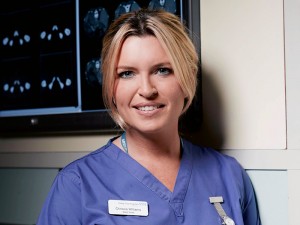 Tina Hobley says about her upcoming departure: “Being a part of the Holby family for the last 12 years has been an experience I will treasure forever but it’s time to explore some new challenges. I have loved playing Chrissie Williams but I’m also looking forward to getting my teeth in to some other characters and new roles.”

Executive Producer, Oliver Kent, added: “As Chrissie Williams, Tina Hobley has been a leading light at HOLBY CITY for over a decade and we will be very sorry to see her go. It has been a joy and privilege to work with her and she has been massively popular with the audience. We wish her all the very best for the future.”

Chrissie Williams’ decade-long HOLBY CITY journey has been nothing less than a roller-coaster ride that saw her evolve from hospital flirt to a strong, wise, professional ward sister. Not only did she survive the slings and arrows of hospital politics but also personal heartbreak and tragedy – as well as proving consistently unlucky in love.

Memorable Chrissie moments include losing husband Owen to registrar Diane and the death of their baby Amanda; feuding with estranged mother Tricia; being held hostage by ‘slasher’ consultant Stuart McElroy; having baby Daniel by unlikely one-night-stand Sacha; meeting the “perfect” consultant, Dan, only to discover he was gay, and finally realising Sacha was the man for her.

Tina will be onscreen till November and fans will be pleased to hear her character is not being killed off.

Tina Hobley in The Jump

Former HOLBY CITY actress Tina Hobley is set to tread the boards next year by appearing in a UK theatre tour of ‘Dead Simple’...

Former HOLBY CITY actress Tina Hobley is amongst the line up to appear in the latest series of BBC One’s Celebrity Masterchef. Tina, who...