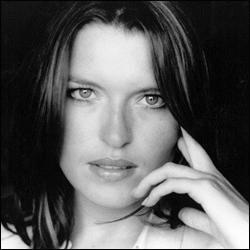 FAMILY : Mum, Kathy and Dad, Harry Snr. Her parents ran a shop when she was young. Also has a younger brother, Harry.

PREVIOUS RELATIONSHIPS : Divorced from her first husband, Graphic designer, Steve Wallington. After getting married in a ceremony in Ennis Cathedral, Ireland in 1998.

TRAINED : Had dance and drama lessons as a child. Trained at The Webber Douglas Academy of Dramatic Art (1990-93).

PREVIOUS JOBS : Worked in a pound shop for six weeks to help finance a holiday to Goa. ‘I had to wear a red coat with ‘Mad House’ on it and found myself actually starting to like some of the products!’

ON CHARACTER CHRISSIE : ‘She’s great to play. You never quite know where’s she going to go and she has such a dry sense of humour. Her professionalism and care of her patients are her strengths. Her worst trait is her lack of a conscience. She’s also selfish, though she never sets out to hurt anyone. She doesn’t overly indulge the patients but I think her sympathetic nature is quite like me. I also think I’d make quite a good nurse as I’m efficient like her.’

HOW SHE GOT PART : It was a long process, Mal Young asked her a year before if she’d like to appear, and he created the part around her.

RESEARCH : Tina did research at a Middlesex hospital which she found ‘breathtaking’. She witnessed a heart bypass operation, and although she doesn’t like people being ill, she found the experience fascinating. She also spent time shadowing a real life Sister, and was told that in every hospital there is atleast one ‘bitch’ like Chrissie.

HOW SHE GOT INTO ACTING : ‘My mum sent me to speech and drama classes when I was five, because I was very shy and wouldn’t go to children’s parties on my own, I didn’t want to ever leave my mum. So she sent me to all theses things, I went to brownies, horse-riding and other things. Then she sent me to a very strict speech and drama teacher, who I adored. I stayed with her for 15 years and went to drama school from there.’

ON MEDICAL DRAMAS : ‘I love them actually. I’m partial to a bit of blood and gore. I’m a huge ER fan, I like them all. I’ve watched Holby from the beginning. I was very up on what was happening here, and I knew what the characters were up to. So it was lovely coming into a show that I actually know very well.’

ON BEING SQUEAMISH : ‘I thought I would, because I could never be a real nurse, I don’t like any messy stuff. But I don’t no. When I went to see a real heart by-pass in the Middlesex hospital I had a fantastic time, and I was right in there, blood all over my apron, watched all the stitching. I kept saying I’d leave soon, but I didn’t I stayed there for four hours and watched the whole thing, it was great’

WHO WOULD PLAY HER IN A MOVIE OF HER LIFE : ‘Amanda Redman. I nearly played her sister once.’

MOST VIVID CHILDHOOD MEMORY : ‘When I was four, I stepped on a cocktail stick. It got wedged in my ankle but I couldn’t see the blood as I had red tights on. My Mum was frightened to pull it out and took me to casualty – she would have made a terrible nurse.’

MOST FOOLISH THING DONE : ‘My brother was run over when we were playing as kids. When the ambulance arrived, I was crying so much that the paramedics thought that it was me who was injured. They eventually summed up the situation and my brother soon recovered.’

WHO SHE ADMIRES : Frank Sinatra

WHAT MAKES HER ANGRY : People who are late.

WHO MAKES HER LAUGH : Jonathan Ross

TELEVISION CREDITS : The Bill; May and June; The Knock; All in the Game; Pie in the Sky; Harbour Lights; Coronation Street; Holby City; Bliss; Ghostbusters of East Finchley

THEATRE CREDITS : Angry Old Man, Anna of the Five Towns; View from the Bridge; It Can Damage Your Health

* Tina is an ideal house guest who enjoys washing up ‘It makes me feel calm and I love it!’

* Tina says being in HOLBY CITY is one of the best and most enjoyable roles of her career. She finds Chrissie a nice rounded character which she didn’t get in her soap career. The job is also perfect for her as it is near her home.

In this article:Chrissie Williams, Coronation Street, May Birthdays, Tina Hobley

Tina Hobley in The Jump

Former HOLBY CITY actress Tina Hobley is set to tread the boards next year by appearing in a UK theatre tour of ‘Dead Simple’...