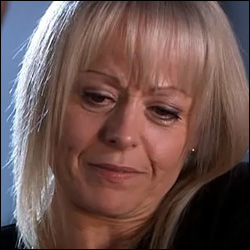 STORYLINE : Sally has been having an affair with her partner, Greg’s, best friend, Neil. Greg finds out and goes to see him, they fight and Neil’s head hits a wall. Feeling sorry, Greg takes him to hospital in his car, but they continue to argue – the car overturns, after swerving to avoid a lorry. There is no hope for Greg, as Sally goes to see him – she leaves her young son, Rahjit, at reception for Norma to look after.

STORYLINE : Noel befriends suicidal Seonaidh who comes into the department seeking solace after her son died exactly a year before.