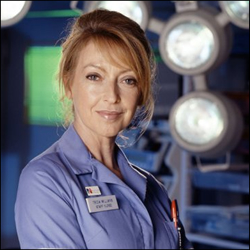 We are first introduced to Tricia, in S5 E27, when she confronts her daughter Chrissie about her pregnancy and recent marriage to Owen. Their relationship is icy at first especially when Tricia says they are alike in many ways. In S5 E28, Chrissie decides to move in with her mother. In S5 E32, Tricia comes to visit Chrissie who is in hospital with a high blood pressure. She offers to speak to Owen for her, but she declines. In S5 E34, Tricia supports Chrissie when she loses her baby. In S5 E35, Tricia takes her daughter to the funeral which is emotional for the pair. She also persuades Owen to make an appearance. In S5 E39, Tricia speaks to Owen – she feels Chrissie needs to move on with her life, and gives him baby Amanda’s possessions for the ward. However Chrissie is annoyed at her mother’s interference. In S5 E41, Chrissie is unhappy to learn Tricia is applying for a secretarial job at Holby. Meanwhile, she constantly bombards Owen, telling him to sign the divorce papers. Owen tries his hardest to convince Tricia that divorce is not the best option for her daughter as he loves her so much and doesn’t believe that there is anyone else like her. Tricia, clearly impressed by Owen’s heartfelt declaration, kisses her son-in-law. Owen responds briefly but soon pulls away saying that it’s wrong. A hurt looking Tricia leaves his office. In S5 E42, Owen learns Tricia is to be his new PA. Tricia says she can’t work with Owen when he reprimands her. She puts in a transfer but Owen doesn’t want her to go. Instead they begin kissing and go into the private office together. In S5 E45, Owen is asked by Chrissie to sign the divorce papers. Tricia snaps at Owen when she comments on him signing paperwork for the ward and whether he can still sign his name. Later, Owen goes to Tricia’s house where they kiss. Owen shows her the divorce papers which she will witness him sign. The two of them sleep together and Owen asks Tricia to turn so he can lean on her back and sign the divorce paper. Tricia does so and looks guilty at what she’s doing. In S5 E46, Owen and Tricia go to a football match together. The pair go back to her flat, however Chrissie comes home as the two of them are together. Owen has to hide on the balcony whilst Tricia comforts Chrissie on her failed marriage. In S5 E47, Tricia and Owen have an argument which raises Chrissie’s suspicions. Tricia offers to be Ric’s PA, and Owen tells her their relationship is over. In S5 E49, Chrissie remarks that her mother has been moody recently, and usually only acts like this if a man has messed her around. Tricia nervously assures her that this is not the case. Tricia tells Owen that she now realises that it was for the best they broke up. She acts very cool and detached, leaving Owen wondering if he made the right choice. Later in the shift, Owen tells her he regrets his decision, and invites her on holiday with him. She keenly accepts, and the pair are a couple once again. In S5 E51, Owen and Tricia come back from their holiday. Tricia is dropped off away from the hospital – but she is ready to tell Chrissie of their relationship. Ed discovers what the pair have been up to when he catches sight of a holiday snap of them. And with his past history with Chrissie – will he keep quiet?

In S6 E2, Owen is torn between mother and daughter who both vie for his commitment. On Chrissie’s suggestion that they “take things slowly ”, he promptly bows out of going to a concert with Tricia. In S6 E3, Tricia is shocked to see Chrissie and Owen kissing passionately at work, unbeknowing they were getting back together. She is devestated which makes Chrissie question her. Chrissie asks for Tricia’s blessing, but as they talk Owen’s house keys fall out of her bag and she reluctantly has to confess all. The pair fight until they are torn apart. By next episode, Owen is unaware of the confession until Chrissie confronts him. In S6 E11, Tricia returns to complete a nurse’s refresher course and is stuck with Chrissie. Her defiant and unapologetic manner causes friction. In S6 E12, Tricia disgraces herself at Tom’s Christmas party. In S6 E14, Tricia has been transferred to the Darwin ward, having completed her training and will be working permanently with Chrissie, who’s not impressed. In S6 E19, Kath and Tricia are extremely supportive of each other throughout the day, enjoying their new-found friendship. In S6 E42, Plastic surgeon Carlos arrives to work on a private patient. Tricia nurses the patient and Carlos is impressed with her bedside manner. But when he tries to pay her for her hard work she is offended and refuses to take the money. In S6 E45, Chrissie asks Carlos to go on a second date but then decides she’s not interested after all. She tells Tricia that he is more her type and she should go for him. In S6 E46, Tricia flirts with Carlos all day but is exasperated that he has not asked her out. Just as she is about to make a move, he asks her on a date and they kiss. In S6 E47, Tricia is on cloud nine after her kiss with Carlos and the couple flirt all day. In S6 E48, Tricia complains that Carlos is taking their relationship too slowly so she brings him to the party to get him drunk and seduce him. In S6 E49, Tricia is over the moon after her night with Carlos but worries that he does not feel the same way about her. Her fears are confirmed when she tells him she’s in love with him but he does not respond. In S6 E50, Tricia is upset about the way Carlos behaved last week. He tries to talk to her but she avoids him, assuming he wants to end their relationship. After work, he tells her he has a surprise planned – he has borrowed a friend’s yacht and treats her to a Champagne lunch on deck. He says he wants a serious relationship and gives her a small jewellery box. Tricia gasps but, when she opens it, there are earrings inside and not the ring she had secretly hoped for. In S6 E52, Chrissie sees Donna flirting with Carlos and tells Tricia. Tricia confronts Carlos but he tells her he was only showing Donna some underwear he had bought for her as a surprise gift. That night, he takes Tricia back to his hotel room and they spend the night together but he makes a shocking discovery – Tricia has a lump in her breast.

In S8 E14, the net is closing in on Tricia, who has trouble hiding the truth from Mark, and Frank’s life insurance company ask Mark to see his medical notes.