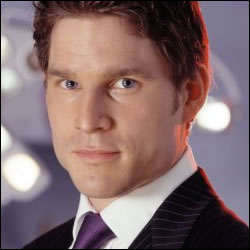 [To Diane] You’ll find there’s a lot of shouting in the army.

Will – full name Lord Will Curtis Harding – had a high upbringing. His army background, had led him to have a rigorous and tough attitude towards his career in surgery, however he lacks personal skills and is often warned about his poor bedside manner. Will is a private man – his colleagues know little of him, such as the fact that he is married with two children.

We are first introduced to Will, when he is still working for the army in S6 E29. Diane makes a visit to the Army hospital to instruct a surgical team on trauma techniques. She is met by Will, with whom she hits it off, and Colonel Humphreys. The three witness abuse between soldiers but the victim will not report his tormentors. Before Diane leaves, having impressed the hospital, she asks Will out for a drink but he refuses and she assumes that she will never see him again. In S6 E31 however, Will arrives as a new registrar and his confidence verges on arrogance. Diane is put out when he does very little to acknowledge her. In S6 E34, during a tense operation, Will questions Zubin’s role in Tom’s departure. Zubin exerts his authority and Will compares the NHS to the Army, saying both institutions have their share of backstabbers.Zubin supports Will’s actions when he makes a difficult decision during the operation and, once the drama is over, Zubin explains the reasons behind his dislike of Tom. They decide to put the misunderstanding behind them. In S6 E35, the new consultant, Connie Beauchamp, arrives on Darwin. Dressed in a sharp designer suit and high heels, she quickly turns heads. Will is not so easily impressed by her looks and they clash. But when he reluctantly comes to terms with the fact that he has a female boss, he apologises for his behaviour, and Connie agrees to give him a second chance. In S6 E36, Will finds it difficult working under Connie’s direction. She puts him in his place when she does not agree with a judgement call that he makes. She sweeps his protests aside, saying she understands his need to assert himself but not at the expense of her patient. In S6 E38, tensions rise at Holby, as Will finds it increasingly difficult to work under Connie. After constantly berating and belittling him, she questions him about his privileged upbringing, letting him know that she got her position through hard work alone. Things come to a head in Connie’s office, when, instead of disciplining Will, she orders him to go out for a drink with her. Although he’s clearly uncomfortable with the situation, she’s enjoying the power game – especially when she discovers he’s a Lord. In S6 E39, Will is adamant that Connie’s charms will not work on him. He heads into her office, just as a sheepish-looking Mubbs is leaving. Connie, unfazed by Will witnessing her rendezvous with Mubbs, continues her attempts to seduce him, but Will declines again. When Chrissie innocently asks Will if he wants to go for a drink after a difficult day, he mistakenly thinks she is flirting. Chrissie is indignant and rebukes Will, saying that public schoolboys don’t do much for her. In S6 E44, Mickie helps Will to perform emergency heart surgery. Will is impressed by her ability and tells her that she should consider retraining as a surgeon. In S6 E45, Connie tells Will she has a file of patient complaints about his attitude and informs him that she will be observing his bedside manner throughout the day. Will fails the test dramatically when he assumes a patient is faking her condition and tries to send her home. When she collapses – she is, in fact, seriously ill – her husband threatens to lodge an official complaint with the Board. Will asks Connie to defend him but she refuses to commit herself. In S6 E46, it is the day of Will’s disciplinary hearing. He chooses to stay in ITU and save a patient’s life rather than attend. Connie is impressed when he explains this and she takes responsibility for his actions to the board. When he finds out he has been reprieved, a grateful Will offers to buy Connie lunch. However, she says she expects more than this from him. In S6 E48, Connie orders Will to attend Ric’s party. After a few drinks, they flirt and she follows him into another room. Will kisses her passionately and Connie pushes him on to the bed in a steamy clinch. However, before things can go any further, she gets up, leaving Will confused. Connie reveals that she does not want him; she just wanted to prove he could not resist her. In S6 E50, Connie is keeping a close eye on Will and, when he makes a poor judgement call with a patient, she punishes him by sending him to a teaching class that night. Ric warns Connie that if she keeps criticising Will, he might quit. Connie tells him that Will has the potential to be an excellent surgeon but he needs to be disciplined. In S6 E51, Will has had only a few hours sleep after working late for Connie. It is his son’s birthday, but Connie pages him to come to work. She refuses to let him leave early and, in the evening, his wife turns up on the ward and shouts at him for missing his son’s party. Connie later reprimands Will, telling him to leave domestic issues at home.