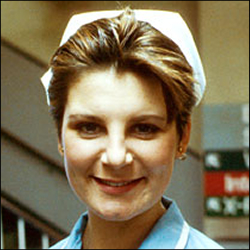 Confident and outspoken Student Nurse Alex Spencer arrives on a motorbike to join the team from S4 E1, and is immediately thrown in at the deep end following a serious RTA accident. In S4 E3, Alex soothes a young girl worried about her pet chicken. In S4 E4, Alex gives a patient with neck muscle spasms a painkiller before the doctor sees him. Duffy witnesses this and reprimands her heavily, she wants to report her but Charlie and Lucy persuade her not to. In S4 E5, Alex has a man throw up on her and after Andrew has left Duffy -she takes out her mood on Alex, saying she never should’ve become a nurse. In S4 E6 Alex swears at a patient, after he gropes her and faces another of Duffy’s warnings. In S4 E7, a carpenter who’s been waiting for a heart bypass for over a year, is brought in after collapsing at his workshop. Alex has been watching him in his cubicle, when she just steps out to deal with a difficult female patient, who’s dropped her bed pan. As Megan takes his wife and son too see him, she finds his heart has stopped. In S4 E8, Alex spends a day shadowing the paramedics. One of their patients is an old lady, Mrs Phelan, with a burnt arm – she is afraid of going out the house but Alex manages to coax her to the hospital. However later in the shift, a psychiatric patient comes in shouting abuse and banging his head on the reception desk. He then pushes Charlie and bites Alex – leaving Mrs Phelan cowering on the floor of a cubicle. In S4 E9, a young girl dies after being circumscised by her grandmother. Alex is upset and Jimmy comforts her. In S4 E11, Alex lunches with her friend, Jonathan, who offers to double her pay with a job in banking, she says she will think about it. As she’s about to leave, a man collapses on the next table. She resuscitates him and takes him to Queens, but he dies. Duffy snaps at her for being later for her shift, until she explains. Jimmy is annoyed no-one takes him seriously, and confides in Alex that he is thinking of training to be a nurse. And Alex treats a male patient with a septic finger who asks her on a date. In her final shift in S4 E12, Alex has decided to quit nursing – she is given a surprise leaving party and given champagne, from a bed pan. But a bomb explosion in the city centre, puts the team on red alert.