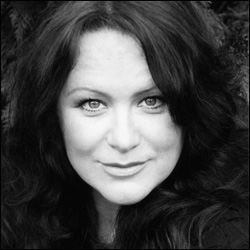 FAMILY : Father, Michael used to be an entertainer and comedian and her mother, Elizabeth, a singer. Has 4 siblings including an elder brother, Ted, and sister, Kate, who are both actors. Other sisters, Emma and Jane. Her niece is actress Emily Atack.

ON CHARACTER RACHEL : ‘Rachel is unhappily married and she falls for Patrick. I never realised how much of a cad he is but from the way he acts around Rachel you would believe that he is just the loveliest guy. Rachel thinks he is as devoted as she is but his eyes start wandering when Lara turns up.’

ON IAN KELSEY : ‘Ian Kelsey’s a really nice fella! Very normal, down to earth and a good laugh.’

ON THE CAST : ‘The whole cast are really friendly. I get on with the women really well – Adjoa (Colette), Christine (Lara) and Zita (Anna) are lovely.’

IF SHE COULD PLAY ANY OTHER CASUALTY ROLE : ‘It would have to be Charlie wouldn’t it!’

ON WATCHING CASUALTY : ‘I’ve watched CASUALTY since I was little. Yes, I’ve seen my episodes – but from behind a pillow, as I hate watching myself do ‘smootchy’ stuff.’

TELEVISION CREDITS : Nightworld – 30 Years to Life; My Hero; Where the Heart Is; Holby City; Casualty; My Beautiful Son; The Royal; The Slammer

FILM CREDITS : All the Little Animals; Up on the Roof; The Second Jungle Book : Mowgli & Baloo; Killing me Softly