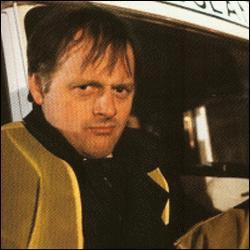 Paramedic Andrew Ponting, had a good sense of humour and fun, but could be serious and sometimes moody when he wanted to be. Married to his wife, Beryl, for over 16 years – Ponting gradually became close to his paramedic partner Sandra Mute, as they spent shifts on the road together, saving lives – and eventually started an affair.

In S1 E6, Ponting and Charlie head a lively meeting and the team plan to hold a demonstration outside a cinema which is showing ‘naughty nurse’ films. In S1 E8, Ponting becomes annoyed that paramedics aren’t treated like other staff members, when he discovers they weren’t invited to Ewart’s staff meeting. In S1 E9, Ponting and Mute have spent the night together and as they get ready for work, she has to remind him that he is married. Later on shift, the pair pick up a man, who has crashed his car. As they take him to the hospital, they are obstructed by a car full of jeering skinheads. The car then crashes into a skip, and they all flee apart from one who injures his arm. They take him in too, but Ponting has to be restrained from attacking him. In S1 E11, they go to the scene of a restaurant where the owner has chopped off his finger, while in the kitchen, after arguing about finding a cockroach in a dish. Ponting is shocked and angry when their next call out happens to be Duffy – who has been attacked on the way to work. In S1 E12, the team make fun of Ponting when they find out Mute has left him for a 4ft11 jockey and gone on holiday to Wales. Charlie suffers a cut lip from making fun of him. Ponting has extra bad news, when his wife rings him up and dumps him, after finding a note from Mute in his lunch box. In S1 E13, Ponting and Mute finally have a heated discussion when she returns from Wales. Mute denies writing the note and says she felt guilty dating a married man.

In S2 E1, the night shift has been closed for six months. When a motorcyclist dies – Ponting believes his life would have been saved if Holby A&E was open and they didn’t have to travel to Queens. The team hold a meeting to discuss ways of getting the night shift re-open. Ponting attempts to get his journalist cousin to write an article and also talks to the dead motorcyclist’s father – but he is too angry to help. They later find out their lobbying has worked and they gain back their night shift. In S2 E4, Ponting celebrates his birthday. He tells Mute that he loves her, but she says she can’t break up his marriage. During their shift, they pick up a suicidal medical student, Miles, who has threatened to jump from the top of a tall building. As he is being driven to Casualty, a drunk already in the ambulance stabs Mute in the stomach, flings open the rear door and escapes. In Mute’s panic, she pulls out the knife in her chest. The team battle to save her in CRASH, but she dies. Ponting is shocked. In S2 E5, devastated by the death of his lover – Ponting tells Charlie he is unable to continue being a paramedic, and says he is applying for another job. In S2 E6, Ponting works his final shift. As he goes to the staff room, he finds his colleagues have a surprise party waiting for him. They sing, shower him with streamers and give him a tankard as a leaving present.