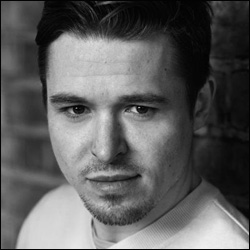 FAMILY : David is the 5th of 6th brothers. Mother, Janet is an accalimed author and playwright.

PARTNER ; Openly Homosexual – has partner, Alex. ‘It’s not an issue to me, so I wouldn’t even consider trying to hide it.’

ON HOLBY CITY : ‘On my very first day on Set, I had to put on rubber gloves and hold this wriggly little baby covered in Vaseline to make it look as if it had just been born. I was petrified that I’d drop him. The baby’s parents were in the corner watching my every move, and I had to make it look as if I was an expert.’

ON RESEARCH FOR ROLE : ‘I know it sounds stupid but I never really thought about giving birth and the time and emotion involved as what starts as just a lump in the tummy becomes a baby. So I got hold of a video of a birth and sat and watched that.. and it made me cry!’

CASUALTY APPEARANCE : David appeared in a number of episodes of CASUALTY during Series 17, as Ben Saunders – in an interlinked storyline involving his relationship with CASUALTY Security Guard Tony Vincent.