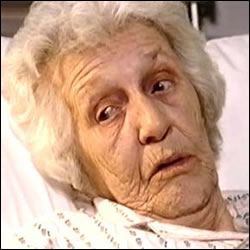 STORYLINE : An old woman, Lillian, is brought in by her daughter, after she has fallen from her commode. She has arthritis and is on the waiting list for a hip replacement. On seeing her suffering, Charlie considers spending his money on his Mum – who also needs a new hip.

STORYLINE : Teenage drug addict, Chris, overdoses on temazepan, while with his mates in a warehouse. But when he falls unconscious they run off, however his young brother, Sean, followed them there and calls the alarm to his father. His supplier turns out to be his Aunt Grace, who believed they were harmless as her GP prescribed them for her. Julian warns his parents, Yvonne and Ted, of the risks of hepatitis and Aids. Later on, Grace is brought in after being severely beaten up – it turns out to be Ted’s doing.

APPEARANCE : S3 E28 ‘The Mourning After’