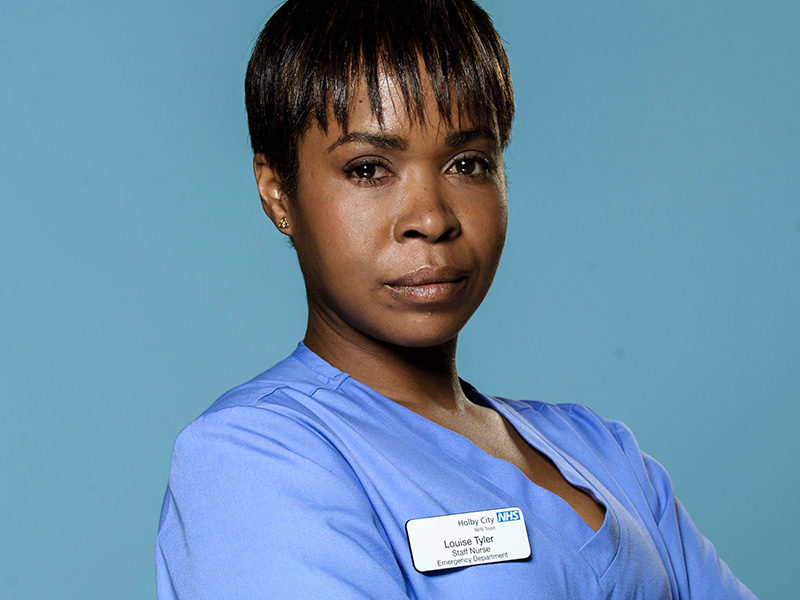 Azuka Oforka bowed out of CASUALTY this weekend, leaving on a a vital storyline highlighting the pressures of nursing in the NHS.

Azuka joined the show back in October 2011 as an Ambulance Control Officer, then becoming Noel’s sidekick receptionist for three series before returning to a nursing position in Series 30. Louise has always shown her strong and passionate beliefs with storylines including a booze bus and visiting a refugee camp, but her problems came to a head recently with money problems leading her to go to a food bank and losing patient Ernest, who was unable to get the treatment he needed.

On Twitter, Azuka revealed her character was only meant to be in three episodes, adding ‘But after 7 years that’s a wrap on my time in Casualty and Louise exits the way she entered….tottering down the ambulance run!! Thank you so much for your love, support and kind words, it means a lot.’

A look back at some of Louise’s highlights .. 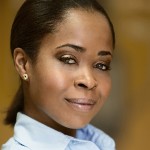 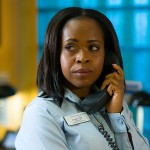 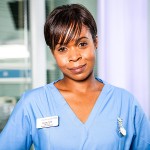 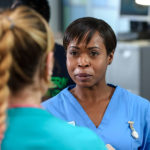 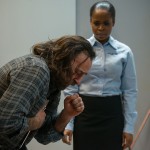 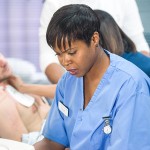 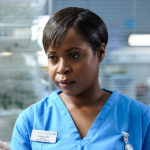 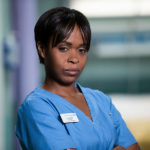 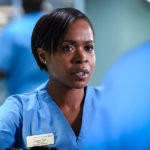 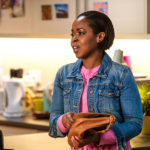 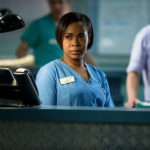 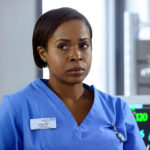 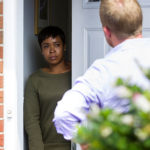 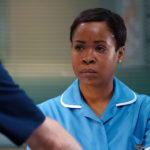 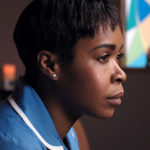 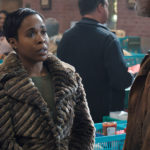 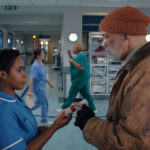 SO much love for my Casualty family, past and present. We work really really hard, but laugh even harder. It was rare for a day to pass where I didn’t fall to the floor in hysterics crying tears of laughter (Sorry Make Up Department!) It’s the giggles I’ll miss the most pic.twitter.com/FtK83HmEsC

Was really chuffed the producers let me add the line about 33,000 nurses leaving the NHS. That one was for you mama. (Though you would never quit! You’d stay and fight) ✊🏾 https://t.co/8ZODkzPuSP

Real personal note. I was a depressed single mum on benefits in recession hit tory Britain, brutal austerity cuts looming on the horizon & along came a guardian angel in the form of #Casualty providing a security I’d given up hope on and for that ALONE I will be forever grateful

What a great talent @AzukaOforka is. So sad to see Louise walk out of @BBCCasualty doors. My beautiful friend…congratulations. I’ll see you for lunch! ❤️❤️❤️

We went through so much together… girl. You amaze me, inspire me, and make me laugh continuously!
Thank you for being my confidant, friend and above all.. my angel. I'm so proud of you. Consistently. Love you x now go out in to this bizarre world and SMASH IT! #tonysdread https://t.co/ezR7t93ona

The end of an era😔
For those that don’t know @AzukaOforka my beautiful cuz, a wonderful actress has officially left @BBCCasualty, her final episode aired last night(catch it on BBC IPlayer)
So proud 2 say I worked with you, I know a bright future awaits you, so keep shining🎭x🖤 pic.twitter.com/t1LRsAfUpb

So sad that my friend has left the show : a great talent and thank u for the laughs and trying to scare me in the workplace by hiding in my dressing room! All the best for the future hun -x

Well #Nurse #Louise has left #Casualty – aka @AzukaOforka my actress daughter! Already had several messages from some of your shocked fans. Let’s see what drama we’ll see her in next! pic.twitter.com/sWkRrXOxx9

Thank you @AzukaOforka for being brilliant as Louise – your performance throughout has been brilliant and the strength and importance of the message of your final scene will stay in the memory for a long time. #Casualty pic.twitter.com/F2wVGdGYPQ

So truly proud to have cast @AzukaOforka in @BBCCasualty. She took the opportunity of what was a small role … and created a character that became a regular and was embraced by a nation.

Big Love and so excited for your future, Azuka … x