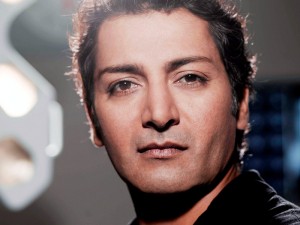 With changes afoot for Hari Dhillon’s character, Michael Spence, who has been in the show for nearly six years. Hari talks to holby.tv about what’s in store…

What’s going on for Michael at the moment?

Well Michael’s in a strange place at the moment in that his family have perversely moved to the States – his English ex-wife having taken their four kids out there whilst Michael, who’s American, lives in Holby so I think he’s having a right chuckle over the absurd comic joke that has become his life in a way!

But I think it has had a sobering effect on him. Has he matured? In a way, yes he has. It’s painful for him being on his own, struggling to see his children and trying to keep hold of his position at Holby. It’s definitely a different angle to play as before Michael would go out, get loaded, chase women and that doesn’t really do anything for him anymore.

Michael is also moving to Keller, which is a big change for him?

Yes, he and Ric Griffin swap wards and Michael comes onto Keller. Ric is quite a slow moving character so the fast pace of AAU is a challenge for him whereas Michael, who almost has no patience at all, is forced onto an area like Keller where he has to exhibit even more patience!

I get the feeling when I’m playing him that half his head is always somewhere else, thinking about his kids. He’s not ghost walking through it but he seems to be feeling his was around things in a different way that he never has done before.

I don’t think he can figure her out. Sometimes she seems cool to him but others times really annoying – the character not the actress I stress to add! I like Ty a lot.

I think when you play this stuff you kind of see how the characters interact and you need a few episodes to see how it shakes down between one and the other, so we’ll see but with Michael moving to Keller and Gemma still in AAU, things will have settled down a bit.

Will there be any love interest for Michael coming up?

Well there better be! But seriously, I’d like to think the next one will probably be for real. There was a little foray with Spanish nurse Maria. She was great fun as an actress and a character. I think that was the first time he thought it could work but before romance he does need to figure out the other situations in his life. With one of his daughters now a teenager and he’s also got a young son. He’s realising now they need to have a father.

Is there anything else you’d like to see them explore with Michael?

I think he’s at this crossroad and it’ll be very interesting to see what does happen. He does need to establish good communication with his children. He’s owed a visit from them – which we will see in future episodes. But I do like the idea of an episode abroad such as the States or India. 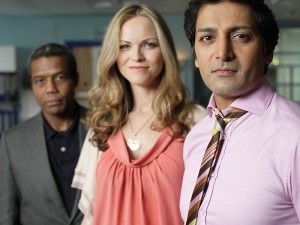 Michael with Annalese and Ric

Could you ever see reconciliation between him and Annalese?

How do you balance long filming hours with family life?

When I was in AAU filming wise, it was nice in the sense that when you were filming  you were crammed on and you wouldn’t see anyone for a week or two so when you’re off, you can be off for a week or two. Now I’m filming on Keller, it’s a little bit different but we’ll see how that goes. To be perfectly honest when I come here, I’m kind of happy for the break. This is not work – work is at home! If you have kids, you’ll know what I’m talking about!

My kids are 6 and 2; my youngest son is breaking things all the time! My daughter has just started school, she’s still got an English accent, and I can’t break her of it! But they are at a great age and fortunately my schedule right now is giving me enough time to be with them. My wife is a freelance yoga instructor, so between us we do get enough time at home with them.

Are there many similarities between Michael and yourself?

Yes definitely. I think one of the things that’s happened is it’s kind of got a lot closer to me in time. At first it was a bit wilder, but now as time goes on there’s aspects of my personality that is written in.

Probably the patience thing is closest, I hate to say it. It’s not reflective right now but there’s definitely a feel of a change inside of him and I feel the same way too. A change inside of me, maybe after having two kids – I guess your life shifts into a different gear. These days I really have to pick my moment if I go out. I have to vet my moment. I’m like where are we going, who’s going to be there, am I going to have fun, and if not I’m like forget it!

And you also always have one eye on the payback in the morning. It’s really going to start hurting at half 6 in the morning! So there’s that kind of change going on inside me. My life isn’t all about me me me right now, and so I think that is reflected in the character. Sometimes when I am here, I have half my head on other things I have to do at home whereas before when I got here it was just a fun time in London.

Do you ever meet up with old cast?

I guess there’s so many of them now, it’s hard to keep in touch with them all but yes we’re always texting and stuff like that. Strangely I was in LA over Christmas and I’d just missed Sarah Jane Potts. I did see Tom Chambers performing in Top Hat, Amanda Mealing and I are always texting, as well as Luke Roberts.

How long do you see yourself staying in Holby?

I don’t know. I think anything is entirely possible. When I first signed up for Holby, I thought unless I really don’t like being in London and it wasn’t working for me then I would probably be on the show for a while but it does have its natural life. It will be interesting to see how it goes over the next few months to a year to see where the character is going. Sometimes they just run a ground; you could play a character for a year and that’s enough but sometimes it can go on for much longer.

I do find myself thinking more about the States than I used to and I quite like the idea of my children living there for a little while but I haven’t thought about it too much although the question is in my head. Certainly as the show goes, I love working here – I’ve been here for five years because I do genuinely like it. And I’m not English so I don’t have to be here, I have the choice to pick up and leave but we’ve really enjoyed it here. I’m figuring it out now and a lot of it is guided by where we find this character going and at present I don’t have an agenda. They’re very good here at talking to you about your character’s development, we’re all having that conversation.

What have been some of your favourite past storylines?

I loved all the Plastics storyline stuff, that was fun to do. I like working with Michael’s kids, the storyline with Maria. I also like doing scenes between Malick and Michael’s character. And also Michael and Chrissie; they are fun especially as they are in the same place as people.

With Chrissie confiding in Michael about her cancer scare and with her own marriage woes, could you see anything develop between her and Michael?

I guess its kind of his turn! I think you could see it as they don’t have judgements on one another. They’ve been through similar things so it’s nice for them to talk to eachother but for anything else, only time will tell!