What’s Raf’s background prior to coming to Holby?

He’s been all round the East; he’s been to Japan and lived in Singapore for a while and the States. He’s a trauma specialist. He has these new style resus techniques that he’s brought from there to the hospital and is very much about shaking things up  – bringing things up to speed with the rest of the world.

He had a great first episode when he comes in and pretty much demands the position, saying they would be idiots not to give him the job!

How would you describe him?

He’s the type of person you would want as your doctor but I don’t think you’d want to hang out with the guy or have a drink with him because he wouldn’t have much chat other than his work! He is perhaps slightly arrogant but he’s very driven, passionate and perhaps too focused on his career – which you will find out more about later when his wife appears. His wife Amy is a Consultant Pharmacist and you will learn there is a price to pay for being as single minded in his career as he is.

So we can anticipate some marriage problems for him?

His family life is troubled in as much as he’s neglectful of his wife, where perhaps he doesn’t quite give her the attention but at the same time she has a very high powered job as well so she can understand where it comes from. But it’ll be interesting to see that whole dynamic when she arrives.

Anyone he clashes with in the department?

He and Harry pretty much bristle with each other from the go. Harry is a very different type of person; Raf is Scottish Italian, working class, he’s had to drag himself up by the boot straps. He sees Harry as someone who’s been very privileged and had things handed to him on a plate. So he is perhaps harder on Harry than any of the others.

He just wants what’s best for his patients and he think that perhaps Harry is more focused on the attention of women and all the other nurses or his personal life. Ultimately Raf is the senior doctor on the ward, he’s effectively pulling rank – he wants Harry to step up. It’ll be interesting to see if he does or not.

My character does have a bit of a problem with authority. In his first episode he does this procedure which is quite unorthodox and risky but he’s very much about the patient’s welfare as opposed to towing the line.

This is why he also clashes with Guy who is very much about not bringing the hospital into disrepute and to be seen to do the right thing; Raf is prepared to put himself and the hospital on the line.

What about the character appealed to you?

I like the fact that he’s so brusk. The interesting characters to play are the ones that are focused on one thing and can rub people up the wrong way and cause conflict, which is great in any drama. 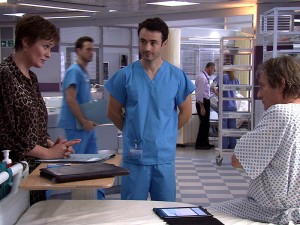 Have you had to do any research for this role?

I was very lucky in that I got to see some heart surgery which was amazing. It gave me such huge respect for what these guys do. You can understand why some have massive egos such as Raf because day in day out they are saving people’s lives.

You’re famed for your role in Heartbeat, what work did you do after this?

After Heartbeat, I went straight on to do Casualty as a semi-regular. I literally finished on Friday and started on Casualty on the Saturday! It was such a different character too; I was playing a homeless guy who had mental health issues. It was quite a dramatic storyline which ended in him throwing himself under a train.

You then went on to do work in theatre, was it a conscious decision to come out of television roles?

I don’t know how conscious it was, you go where the good work is. I think it’s important for every actor to do theatre as it gets your muscles working again. There’s a real sense of power of doing a show every night. I got to work with the National Theatre in Scotland and the Chocolate Factory last year which is actually where I met Simon (Harper) who came along and saw it and kindly said when I joined that he’d been waiting for a role to come along.

Is it nice to be joining such a long running, successful show?

I had a good few years in theatre but it’s great to do something like Holby. It’s so popular and a lot of people get to see your work. There is something very nice about coming in to something that is so established, smooth running and everyone is good at their job. Everyone is so genuinely happy to be here and that comes from the quality of the work.

Are you at all daunted about joining Holby?

Slightly I suppose as I’m always very keen to know what the viewers think. As you’re so focused on getting to grips with the character, you just don’t know how the audience are going to feel about it, so it’s exciting to see what they think especially in a show that is so long running and well loved.

I know people who’ve read reviews and completely altered their performance because of what one person has said, so you have to be quite sensible and not take it to heart too much as it is just one person’s opinion. That is the danger on Twitter, everyone has a voice now and if you are going to listen to the voice you have to take it with a pinch of salt.

Who else would you like to work with on Holby?

The thing I hadn’t realised before I joined was you have your little cocoon down in ‘AAU’, so you work with the same people. Which is good in that you build a rapport with them but I didn’t realise I’d only see the rest of the cast in make up every now and again!

I’d like to work with Michael who plays Jonny – get the Scots together!

Did you know any of the cast prior to working on Holby?

I had met Louise Delamere, as we went to a wedding with her best friend and my agent at the time. So it’s lovely to see her again but other than that I didn’t know anyone at all.

Were you a fan of Holby beforehand?

I am, I’d seen bits of it over the years. I’ve had friends who were in it at various times. I love hospital dramas; Nurse Jackie is one of my favourites and I tune into Grey’s Anatomy as well.

Do you find it hard learning the medical jargon?

It’s difficult; it’s like learning another language. My first day was with Catherine and she says you just have to drill it in. Some of the most difficult things to say are the ones that go unnoticed by the viewers.

Gillian Kearney, who was in Casualty, gave me a nice little trick of writing it on post it notes round the house so when you go in the fridge you can reel it off! It sounds mad but you have to be able to rhyme it off like it doesn’t mean anything and you can’t labour it too much.

I know doctors who watch the show to see if we are saying or doing the wrong thing, but we have a lot of medical advisors standing by making sure we don’t.

Do you get at all squeamish with all the blood and gore?

No not at all even when I watched open heart surgery, I just find it thrilling. When you see it infront of you and when they slow it down and they put their hand in to stop the heart; it was just amazing to watch.

Is there any acting work you’d love to do in the future?

I try not to think of specific roles or jobs. I have some buildings I’d like to work in; I’d love to work in the Citizens in Glasgow where I  grew up, I’d also quite like to do the National Theatre in London, other than that I think I’d be rather ungrateful to choose lots of jobs I’d like to do.