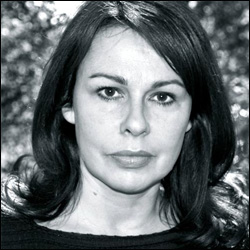 FAMILY : Mother, Betty Gillin, died aged 50 of lung cancer. On her mother’s death, ‘Not a day goes by when I don’t think of her, her death has made me aware that we should make the most of every day of our lives.’ Her father, John, left when she was a child, she has only met her natural father once, aged 19. At age 8, she gained a Step-Dad, writer/broadcaster David Webster.

PARTNER : Joseph Bennett ‘I’m very much in love, I think I may have just found the love of my life.’

Had a previous relationship with actor/musician Joe McGann, ‘Joe’s wonderful because he has no problem with women, he loves women, there’s a very female side to him and he would never feel the need to express himself with fists’. They met while appearing in ‘Cat on a Hot Tin Roof’ together.

ON AN EX-BOYFRIEND : Julie was physically assaulted by an ex-partner for two years, ‘I usually hate it when celebrities attach themselves to a cause, it’s very easy for actors to stand on a platform and spout off on something they know very little about. But domestic violence is not a glamorous issue.’

PREVIOUS JOBS : Worked in a law office, and also on the doors of Pussy Galore strip club.

THEATRE CREDITS : Round the Twist; Beauty and the Beast; Les Liaisons Dangereuses; The Revenger’s Tragedy; The Park; Cat on a Hot Tin Roof; Helpless; Fool for Love; Enlightenment

* Julie has two tattoos, one on her right arm of a green thistle, and a star on her left hand

* Julie used to set up workshops for the single parent organisation ‘One Plus’.

* As a teenager, Julie suffered from severe eczema, brought on by her mother’s death.