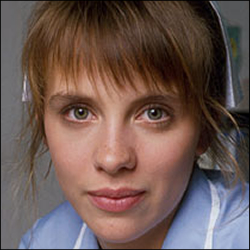 Mary : Nurse can I have a swab please?

In S2 E2, Charlie introduces Student Nurse Karen O’Malley to the team. Later at Susie’s flat warming party – they get close, making Cyril jealous. Next episode, in S2 E3, we discover they have spent the night. When Cyril calls for her in the morning to play squash, Charlie slips out the back. As they play squash, in another court a man suffers a heart attack. Cyril and Karen attempt CPR, but cannot revive him and he dies. After her shift, Charlie takes her to breakfast. She is upset, when he tells her their night together was just a one-off, since he was on the rebound from Baz. In S2 E4, Karen sees his first death – a man in CRASH with severe head and chest injuries. She is sick and cries, and the team comfort her. In S2 E8, Cyril and Karen are both revising for their exams. Cyril thinks it will be a breeze, but Karen is nervous. Karen spills the beans on Duffy’s new romance to Susie. And at the end of shift, the team give her a lucky charm to wish her good luck in her exams. In S2 E9, Karen has passed her exams with flying colours, but reveals her plans to quit nursing and head for London. Charlie tells her she’s doing the right thing, as it’s too late for him. He says he’ll miss her and they kiss. In S2 E10, Charlie and Karen say their goodbyes, and Karen hopefully gives him her London phone number.