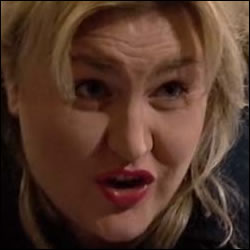 Leona, the person who constantly turns up in the department in need of psychiatric referrals made her first appearance in S14 E23 – As per usual she turned up wanting to see Charlie, when she does she soon starts hurling abuse at him along with anyone else in sight. She went and showed him a bruise that she had and he didn’t really think anything of it, wondering why she had shown him ‘just’ a bruise, like she’s trying to seek attention. He then asked her why she always seems to end up cancelling her psychiatric appointments, she then left without a answer.

Later on in that same episode she ends up going to a centre just as Reg Podmore, the person who had been there was leaving, she ends up leaning against his car and as he drove away she fell over. Leona then went back to the A&E again, getting Charlie to sort her cuts out from the accident when she inquisitively asked him about going to see the psychiatrist, he told her what was involved and she agreed to go and see one, before he informed her that he is one of her only and best friends.

Then in S14 E29 Leona arrived at the hospital for the appointment that she had agreed to go to, asking to see Charlie before she attended although couldn’t seem to find him, when he found out about her being there he decided he was going to try his best to avoid her like she was a really difficult person to deal with.

In the second part to that episode, S14 E30, Leona came into the department yet again, this time claiming that she had managed to get off the alcohol, she went to find Charlie to inform him although all he seemed to want is for her to get lost, not really caring less about her news. She continued to try and talk to him before getting so frustrated, not realising about his medical emergency, she stormed off.

A few episodes later, in S15 E6, Leona ended up in the department complaining of stomach pains, she refused to undress for Patrick, as usual wanting to see Charlie. She soon ends up burping which makes Patrick think her stomach pains are just down to wind, she then storms out.

Leona ends up in the toilets where she started bleeding heavily and the pain ended up getting even worse, she soon collapsed onto the floor. Charlie heard her cries of pain and found Leona, and soon told her that it seemed like she was actually about to have a baby. Patrick soon turned up and informed Charlie of his diagnosis. Leona was taken through to paeds resus where Leona gave birth to a girl, informing Charlie that she would name her after him then after looking back over at Patrick again she told them her second name was going to be Patricia, the female version of Patrick. She said that she was scared and didn’t have a clue about what she’s doing, Charlie tries reassuring her whereas Patrick just says social services will soon end up having to be involved, because he thinks Leona isn’t fit to be a mother.

Leona then didn’t appear again until a few episodes later which was S16 E10. In that episode she came into the department, this time complaining that her daughter, Charlie was unwell – she thought it could be meningitis. Patrick, who came to look at baby Charlie, seemed to think it was due to her wearing too many clothes at any one time, like a heat rash. Leona also informed Patrick that her daughter is now called Charlie Britney, not Charlie Patricia. Later on Leona left with free nappies and baby wipes, Duffy still concerned about the welfare of her baby. Then after that, she was never to be seen again.

*S14 E30 – Apparently coming off of the alcohol.*S15 E6 – Giving birth to baby girl Charlie Patricia.*S16 E10 – Coming into the department with her daughter Charlie, who seemed to have some sort of a rash.