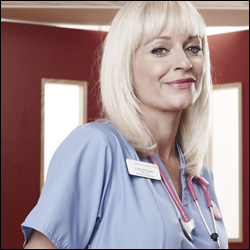 Linda : Wow! Now that is a smile, does your cat know you’ve got it?

Linda is a fun-loving party girl, a live fast – die young type of person. She is a good nurse but hates hard work.

We are first introduced to Linda in S24 E21 when she goes to visit her old friend, nurse Jessica, who is currently in a coma following an accident. During the episode of flashbacks, we see how her and Jessica met. In S24 E24, Linda, turns up at the ED with an injured arm, she outlines a proposition to Jessica which gives the grieving mother some food for thought. Jessica agrees to go travelling with her two children and Linda.

We don’t see Linda again until S25 E38 when she returns to the ED to work as a temp nurse following Tess’ departure. With the ED at full stretch after a lorry crash, the team are underwhelmed by Linda’s performance but she must have impressed someone as it looks like a major promotion, as Clinical Nursing Manager, is in the offing. In S25 E39, Linda’s first day in charge is shambolic: she’s hungover and dishevelled and the whole gang are against her. Attempting to get the nurses on side, Linda’s wayward private life catches up with her in a mortifying way when one night-stand, Kevin, turns up at the hospital with a “surprise”. Linda attempts to turn things around and get the team behind her. In S25 E41, a disapproving Tess and a hungover Linda clash over their very different management styles. Linda is determined she’s in the right, until a run-in with a grieving patient forces her to reassess her attitude. In S25 E42, Linda goes head to head with Jordan over budgets, only to find unlikely assistance in the form of Jordan’s new PA. In S25 E47, Linda does a great job of managing the ED through the major incident at Holby Airport but is forced to take stock of her career options and stands down as Nursing Manager.

In S26 E3, Linda finds her attitude softening towards young drug addicts Annie and Chloe who have turns up at the ED. In S26 E7, recovering drug addict Chloe is in a critical condition following her beating from a dealer, and Annie waits desperately at her side. Linda blames Jordan for closing the drugs programme which would have kept them both safe. She’s forced to take desperate measures as Annie’s withdrawal symptoms and grief threaten to overwhelm her. In S26 E10, desperate for a fix, Annie contacts Linda, who steals some valium to ease the cold turkey. But on leaving Annie’s house, Linda is confronted by Annie’s violent pimp, Damon. When Damon then confronts Annie she hits him with a wine bottle and they both end up in the ED. When Damon and Annie are later discharged, Linda is shocked to learn they’ve returned to Annie’s house together and she risks Tess’s wrath to go and help. In S26 E15, Linda’s former adversary Damon is back in the ED, along with his baby daughter Evie and her new foster mother. Violent Damon has realised that Linda previously lied to him about Evie’s parentage and makes plans to kidnap his helpless baby daughter. In S26 E19, Linda stops a young girl from stealing from the hospital shop and is shocked to discover it’s her niece, Britney. She’s even more horrified to learn that her sister, Denise, is on the run from the police with her two children. When Denise tells her that they need somewhere to stay, just until they get back on their feet, Linda relents, until she discovers that Denise is still using drugs. In S26 E20, Denise disappears on a bender leaving her children, Britney and Joe, behind, Linda is forced to bring them into the ED. The children cause chaos and matters come to a head when Britney steals a baby to get back at her Aunt. But Linda faces an impossible decision when she finds out that Denise is likely to go to jail and the children could be taken into care. In S26 E21, after taking on her sister’s two children, Linda tries to incorporate their care into her busy life. After a frantic day at the ED she discovers that care doesn’t end at the school gates, but finds support from Lenny. In S26 E22, Linda has a chance to reassess her feelings when Lenny tackles her about putting her niece and nephew into care. In S26 E24, Britney turns up at the ED after head-butting a girl at her foster home. When Linda tries to reason with her, Britney storms off. But she falls in with a bad lot of teenagers who try to teach Linda a lesson by texting her to say that they’ve kidnapped Britney. At first Linda ignores it but when the teenagers turn nasty, she is mad with worry. The experience makes her realise she wants to care for her niece and nephew after all. In S26 E28, Linda is moonlighting in a private clinic to earn extra money but, exhausted by the late nights, is starting to make potentially dangerous mistakes. In S26 E29, Linda and Zoe enjoy a girls’ night out, but are quickly sobered by an encounter with a teenager in need of help. In S26 E30, Linda is bracing herself for family court, but niece Britney comes into the ED and tries to get her into trouble by stealing from a patient. Zoe tries to make Britney see that living with Linda might not be such a bad option. In S26 E32, Lenny tries to kiss Linda but she rebukes his affections leaving him embarrassed. In S26 E36, Linda thinks that she’s making progress with Joe and Britney and that they are starting to behave like a real family. Encouraged, she organises a shopping and pizza expedition. But when Joe is too ill to go, Britney is furious and threatened by Linda’s increasingly close relationship with her little brother. As Linda tries to stop her from storming off, Britney slaps her across the face. 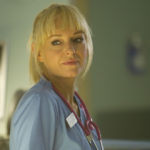 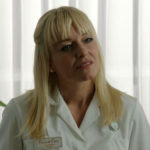 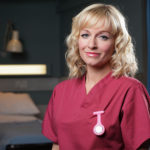