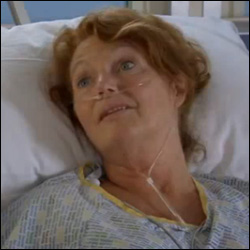 STORYLINE : Judy, steals her ill daughter, Katie, away from her father, Duncan, who is involved in a religious cult. As she gets worse, Judy, takes her to casualty, where Duncan and his leader, Hastings, are already there, looking for her. They oppose dialysis for Katie, which is needed in order for her to live, and face Julian’s anger. In the end, Duncan relents.

ACTOR FAMED FOR : Leela in Dr Who; Susan Young in Bergerac; Rosa di Marco in Eastenders

In this article:Doctor Who, Eastenders