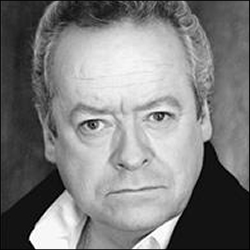 FAMILY : Michael was married to Lesley (m.1968) with two actress daughters (Emma and actress, Kate Harbour) . He became a grandfather in 1995 and is survived by six grandchildren.

He was one of six children.

ON CHARACTER TREVOR : ‘I have some sympathy for him. Trevor wasn’t happy trying to look after the home while his wife went out to work, he’s the sort who likes to be involved. When he moves into Kate’s territory, we begin to see there is tension between them.’

ON MUSICAL ZORRO : ‘That was the most exciting thing I have ever done and I’m sure it would have moved to the West End and been a huge success had Ken Hill not died just as he finished writing it, anyway I was lucky enough to get the best reviews I’ve ever had, which stuck in the mind of the casting director at CASUALTY, so Zorro is linked to Trevor, this former policeman.’

PREVIOUS CASUALTY APPEARANCE: Michael has appeared in CASUALTY before his role in Trevor, in S7 E4 he plays the father of a patient, who is assaulted by a fake doctor. [More Info]

THEATRE CREDITS : A Little Night Music; Phantom of the Opera; Sweeney Todd; Into the Woods; Zorro The Musical; The Invisible Man; My Fair Lady

* Michael, who began acting at the age of six, was also a keen singer and had a career in folk singing.