Alright, Josh? You leading on this?

In S18 E1, Mike is working as a fire chief in the Holby train crash, rescuing people from the wreckage and controlling a team of firefighters. The situation becomes critical in the tunnel and he makes the judgement call to send a team in to attempt to rescue a group of schoolchildren found by Comfort. Midway through the rescue, the tunnel collapses, trapping 5 firefighters. This continues into S18 E2, where he fails to make contact via radio to his friend and colleague inside, Bob. He panicks and wants to evacuate the whole site, but Josh persuades him to wait, as Anna is still inside, trapped. A firefighter is found dead, and Mike feels responsible. Mike has to make the judgement between saving injured and trapped people but risking the lives of the emergency personnel. And, he makes the wrong decision by staying in the wreckage too long. Feeling responsible, he calls his wife, Tess for reassurance. He breaks down, but is comforted by his wife’s words and returns to the scene with renewed determination. S18 E3, he finds Tess at the hospital and confesses to her that he has been suspended for making the wrong judgement at the train crash. He also feels responsible for the three firefighter deaths. In S18 E7, he confesses to Tess that he has resigned because he feels he will be sacked for making the wrong judgement at the train crash – they need a scapegoat, but decides to resign due to his pride. He feels so guilty and responsible for the deaths – he cannot cope. Tess is frustrated by his pride and furious, knowing they cannot survive on her salary alone with the kids. In S18 E10, the state of hygiene in A&E is appauling – Tess is fuming and sneakily organises an interview for Mike for a cleaners job. His pride is hurt and and he is angry with Tess for arranging this behind his back. However, the interviewer (Marcus) enters before he can leave and Mike goes through with the interview. Despite his pride and reluctance, he is offered the job. In the next episode, he is paranoid because everyone is being so friendly towards him. He confronts Tess – she is very sharp with him. Later, he comes face to face with an old colleague, Frank Davis. Mike misinterprets his visit to the hospital and Mike tells him how he has lost all pride and dignity, “everyone’s too good for this job”, embarrassed and ashamed, he throws down the mop and walks off the job. At the calendar launch, he presents Tess with flowers and tells her Marcus has given him his job back after lots of grovelling. In S18 E24, Bex shows off all her Valentine’s cards and is teased by Claire. Tess tells Bex off because her cards are “unprofessional”, as Mike enters with a huge bunch of flowers for Tess. She turns her attentions to him, and tells him off because they must have been expensive. However Mike was earning the money by working as a bouncer at the boxing match. However, he is beaten up my a gang, and his hand trampled on. He tries to avoid Tess when Nikki brings him in to A&E but they eventually run into each other and he is forced to explain that he needed to buy her roses to maintain some of his bruised pride.

When Mike makes a return in Series 19, we discover he is back on his job at the oil rigs. In S19 E25, Tess has recently learnt that her eldest son, Sam, has a mental disorder. When Mike arrives home from the oil rigs – Tess tells him about Sam and he is angry that she has not told him before and that his break from work will not be as relaxing as he thought. In S19 E26, Tess and Mike take Sam to see the psychiatrist, Sam tells him he has thought about suicide. The doctor says he wants to admit Sam into hospital for a few days for further tests – it is too early to make a diagnosis at the moment. Sam begs not to go but Tess tells him it is for the best. Mike is angry with Tess for not telling him about Sam and they argue – Mike storms off. Later, Nina and Comfort are called to attend to a car crash – Mike is the driver. He is taken to the hospital seriously ill, Tess is devastated. In S19 E27, Mike is still in a critical condition and Harry advises her that she should allow them to turn off his life support machine. As she keeps vigil by his bedside, she prays for a miracle. Later, it appears that her prayers have been answered; Harry says that Mike has not deteriorated at all, and that he has never seen anything like it in his life. In S19 E29, Mike is showing signs of getting better; he is awake, but paralysed, and asking Tess to take him home. She confides in Harry that she will not be able to cope. In S19 E29, Tess is in a dilemma about whether to tell Sam about his father. She goes to see Sam at the hospital and although the doctor advises her not to she tells him that Mike has been in a serious accident. Sam does not seem to fully understand what is going on but asks if he can visit Mike.

In this article:Louis Emerick, Mike Bateman 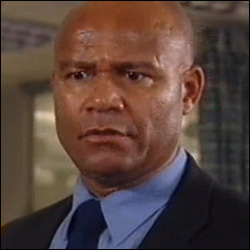