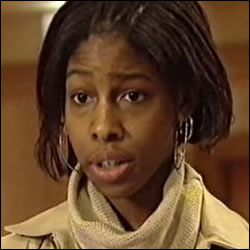 Natalie first appears quite suddenly in A&E at the end of Series 15. She is Colette Griffith’s daughter who was adopted at birth by another family and now she is old enough, she has decided she wants to meet Colette and get some answers as to why she was given up for adoption.

Her arrival is unexpected and Colette is shocked to see her. However she recovers slightly and the pair go for a walk. Colette tries to explain why she had to give her away -because her mum made her – but Natalie finds it hard to believe. Colette tells her about Natalie’s father, David, who left her when she became pregnant, and wishes she had kept her. Natalie sas to Colette that she thought she was given away because she wasn’t pretty. Colette says that can’t be true because she is beautiful, and pulls out some photos from her purse of Natalie as a baby. However, Natalie gets upset and walks away, saying that Colette doesn’t have the right to get to know her.

Later on, Natalie returns, having calmed down. In the corridors of A&E, Colette asks for Natalie’s address so she can see her, Penny then comes up to them but Colette doesn’t explain who Natalie is – leaving Natalie to think she is ashamed of her, and she storms off again. Josh takes Colette aside to ask her how she feels about their relationship, she says she is happy, then Natalie bursts in – Colette tells him she is her daughter.

We next see Natalie in S16 E2 when she arrives at Colette’s and announces that she is pregnant. Colette is pleased for her but Natalie goes on to explain it has made her realise she can never understand how Colette gave her up and no longer wants to meet her. Colette is upset at having to lose Natalie over again.

In S16 E14, a pregnant Natalie arrives to see Colette again as she has heard Colette is getting married. But Natalie goes into labour early and delivers a baby girl in the ambulance. Complications occur when she hemorrhages, and she is taken to A&E. Colette and Josh are forced to put a hold on their wedding as Natalie fights for her life.

In S16 E15, Natalie recovers in a ward with Colette beside her. Natalie’s foster mother, Sue, also arrives to see her, which Colette finds hard to deal with. She says she wants both of them to be there and apologises for shouting at Colette when she was with her as she gave birth.