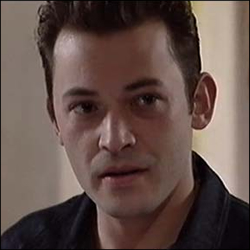 [in reception to Adam] Oh oh, I do declare, if it isn’t prince charming…

Reuben first appears as a patient in S14 E18, when he comes in with a sprained ankle. Adam goes to get Reuben to come into a cubicle and Reuben immediately likes Adam and starts flirting with him. Later Adam is trying to avoid having to treat Reuben, but Reuben asks for Adam so he can’t avoid it. Reuben offers to teach Adam to dance, but Adam is not too keen. However, at the end of the shift a persistent Reuben is still there, waiting for him. Adam explains that he can’t do it because they met at work, but later he admits that he is HIV positive. Reuben says that he is too and in the end Reuben, with his sprained ankle, teaches Adam how to waltz on the roof of the hospital.

Adam and Reuben start seeing each other and in S15 E2 Adam and Reuben are about to move in together and they go to see their new flat and when they in S15 E3 are having a housewarming party Reuben proposes to Adam and he accepts. In the following episode Reuben, who has been trying to decorate the flat, comes to hospital with a toothbrush holder superglued to his hand, much to everyone else’s joy.

In S15 E5 Reuben comes into the department to talk to Adam after the press has found out about Adam being HIV positive. Adam tells Reuben that he does not want them to be together anymore and Reuben walks away. In S15 E6 Adam runs after Reuben and tells him that he did not mean what he said about wanting him to leave and that he only wanted to protect Reuben from everything that is going on. Reuben is already about to go when Adam changes his mind. Reuben asks him what he wants and Adam, who has realised that he cannot go on risking people’s lives by scaring them away from the hospital, decides after a little encouragement from Reuben to talk to the press.

Later on Adam and Reuben have a housewarming party and to everyone else’s surprise they admit they are going to get married as well. Because Charlie, who has their rings, is nowhere to be seen, Josh and Fin let them borrow theirs. Adam and Reuben exchange vows and as soon as the salsa music starts playing the party is in full swing. As they drive away, Reuben tells Adam he doesn’t think he could be brave enough to do what Adam just had done, but Adam admits that he could not have done any of it without Reuben. They drive off to the sound of salsa.