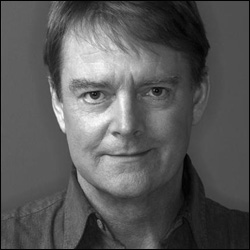 LIKES : ‘I’m a mad keen sportsman – tennis, cricket and now golf. Ian Botham introduced me to it when we appeared in pantomime together. Now I’m addicted.’

PREVIOUS JOBS : Worked as a teacher and a journalist before going to drama school at 24.

ON CHARACTER PETER : ‘I was delighted to be going ‘straight’ on TV, playing a genuine person, someone not warped or twisted like Gus (his Drop the Dead Donkey character). But there are interesting twists here. Peter is trying to win Brownie points with Baz, who wasn’t originally keen to return to Holby, but did it for him… I think viewers will like Peter though. He’s a sad man like Gus in a way. But I think we can assume that unlike him, Peter is not a complete sexual innocent.’

ON BAZ AND PETER : ‘I think he and Baz will either get divorced, kill eachother or end up in one of those cubicle beds.’

ON GORY SCENES : ‘Gus would be a servant fan of Casualty. He’d love all the blood. I watch those bits with my eyes closed.’

REAL LIFE PATIENT MOMENTS : ‘Luckily I’ve only been a patient once. And that was to have a ganglion like cyst removed from a wrist, hardly major surgery.’

PREVIOUS CASUALTY APPEARANCE: Robert has appeared in CASUALTY before his role as Peter, in S7 E16 he plays Neil Taylor, whose step daughter is taken ill after being abducted by her natural father. [More Info]

RADIO CREDITS : Life, death and sex with Mike and Sue

* Robert has been a long time supporter of the Daniel’s Charitable Trust and attends their annual fundraising ball every Valentines Day.