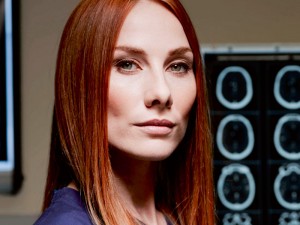 Having joined the show back in 2005, actress Rosie Marcel is playing one of the show’s longest serving and popular characters, Jac Naylor. Ruthless and ambitious, we’re about to see a different side to Jac with the arrival of nurse Jonny. Rosie reveals more to holby.tv…

How does Jac come to meet Jonny?

It’s an interesting situation really with Jonny. She meets him at an Anger Management course. He tells Jac he’s a doctor – which he’s not. Her interest is peaked straight away and they end up in bed together! Then there he is later on, on the ward as a nurse. Jac’s mid eating apple and there he is!

It’s a funny romance, a kind of love/ hate relationship. It’s quick, convenient sex – there’s no sort of seeing eachothers houses, there’s no beds, it’s just this is what we’re going to do – don’t get emotional and don’t get involved.

Does he get under her skin because he’s not intimidated by her?

He’s not scared of her and he gets under her skin because she’s surprised by his reaction towards her. Because after all she’s Jac Naylor, Cardio thoracic surgeon, extraordinaire! But saying that she’s not going to play his games either. At times he really annoys her but if it means he’ll shut up then yes she’ll kiss him!

Jac doesn’t have many laughs, is it nice to have a more light-hearted storyline?

Yes, its nice to see Jac on the back foot a bit, to play a bit of humour as well. She doesn’t have a lot of laughs, she’s quite vile usually! She still is, but it’s interesting to see how she is in this situation. Jonny finds it really funny, which is the really annoying thing for her. It drives her crazy because Jac can say the most awful things to someone else and they will run away crying whereas she’d say it to him and he’ll just laugh at her.

Is it difficult playing such intense scenes with a new character?

It’s difficult in the sense that I had to take my top off as well in this scene, there was only one way to shoot a backless scene! It’s tough but you just kind of get on with it. Filming such scenes are quite clinical so you don’t really have to time to think you’re kissing someone.

My partner probably finds it harder than we did. You’re getting paid to do it and you have to do a good job as the worse you do it, the more you have to film it!

How does Jac interact with other newcomer, Mo?

The first thing Jac sees is Mo’s pregnancy bump and she’s completely appalled by it! As far as she’s concerned it’s the most unprofessional thing you can do if you’re a surgeon. So her feelings towards her are of the mindset that she won’t be here that long, so doesn’t need to make the effort with her. But also she happens to know that Mo is a very talented surgeon and Jac doesn’t like that.

And also that she’s best friends with Jonny?

Exactly. Jac is like ‘Have you told her?’ and he’s like ‘no’ when he so has! Part of her is probably thinking could the baby be his so there’s a whole other level going on that is playing underneath everything else. There’s no sort of love lost between Mo and Jac, it’s a bit of a sarcastic relationship. Mo is also someone that isn’t
scared of her, or her reputation. Mo puts on a bravado; Jac knows Mo knows what she’s like.

How are things for Jac professionally since Sahira left?

I think the problems she had with Sahira mainly were that she never got the attention because Sahira was always Henrik’s favourite. As much as Jac is an idiot and does ruin things for herself, she is also a talented surgeon and people do rely on her. It’s nice for Jac, now that Sahira’s gone, that she can approach Henrik with great ideas and is getting a bit more respect from people. She’s no longer afraid of Henrik.

Do you get any say of how they develop Jac?

I think after seven years, I do get more of a chance to say ‘could we please not have her do this so much’ or let’s develop this a bit further because I don’t want viewers to get bored and I don’t want to get bored. It’s a long time to play one character and to be fair, if I was bored I wouldn’t be here but she is such a great character.

What reaction do you get from playing a personality such as Jac?

A few weeks ago I got, ‘You’re quite nice in real life!’  It’s probably made me a nicer person playing a bitch every day but it’s a lot of fun – I love playing her.

Do you find it hard staying in character when on Set filming?

We had a situation just yesterday with a really long word I had to say and I ended up saying something a bit rude by mistake. It was the end of a long day and we just started laughing and couldn’t stop! But once I’ve got her on, I’ve got her on. I make up for it by having a lot of laughs in between takes. I don’t like people to think I am like my character, I’m a lot more fun!

Do you find the schedule quite relentless?

It is but because there is such a big cast, you get between 5 and 8 good storylines a year but then you do get breaks. So you do get time off when you’re not scheduled. When you’re on, you’re full on – long hours, every day, every scene. It can be relentless and I think that was one of the things Laila [Rouass] found the hardest and why it didn’t last longer than a year for her because she was exhausted.

I’m in between dressing rooms at the moment. I’m very lucky after seven years I’m being given a new dressing room on a different floor, with added amenities. Hugh has one because he’s been there so long and Paul Bradley, so now I am getting one too!  I was really unkeen to move at first because I was previously opposite from Bob Barrett and I love Bob! He’s wonderful, so I shall miss not being so near him. My room is a bit minimalist. I have pot plants and artwork. I also have my own art materials. Sometimes I’ll have a sketch or something but I don’t really get a lot of time!