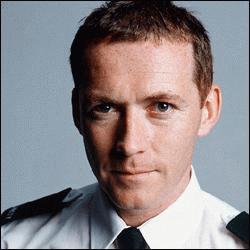 Ryan: Oh Lisa…I’m going to make you so happy.

Duffy: Hang on, there’s a few thing we need to get straight first.

Duffy: This is your one and only chance. If you ever let me down again in any way and god help me, that’s it, there will be no way back. Understood?

Duffy: And everything, money, house, whatever…everything…is in my name. Yeah?

Ryan arrives in S17 E3 as a security guard in the Casualty department, taking over the position previously held by Tony Vincent. In his first episode he comforts a woman on a bench outside of A&E who reveals she’s lost her mother. Ryan says that his own wife died quite recently after losing a battle with cancer.Later, Ryan is told by Charlie that the woman he spoke to worked at the hospital as a Sister – it was Duffy. From then on, Ryan is friendly towards Duffy but she is cautious about letting him get to close to her. However, by the end of S17 E6, Duffy has agreed to a date with Ryan, after initially refusing when he asked her. In S17 E7 he is upset when Duffy changes her mind about the date again, as he’s prepared their evening quite carefully. He offers to give her a lift to see Lara at the prison and she agrees. In the car Ryan kisses Duffy, who’s surprised and a little hesitant. Ryan apologises and says that he shouldn’t have done it, that she didn’t need someone like him coming onto her. Duffy smiles and leans to kiss him again. The two quickly develop a relationship that is common knowledge in the department by S17 E11 when Roxy spots the pair kissing in the staffroom.

Ryan quickly becomes popular in the department, giving Jack advice when he has relationship problems. In S17 E7, Ryan brings in an old lady who has fallen down some steps. In S17 E12 he acts quickly when a disturbed man pulls out a knife on Lara – Ryan hits the man on the head with a fire extinguisher.

Duffy and Ryan have become very close by S17 E15, and Duffy plucks up the courage to ask Ryan to move in with her. He agrees and they kiss, alone in the staffroom – but are interrupted when Charlie comes in! In the New Year episodes, we see that Ryan and Duffy have obviously shared a happy Christmas and Ryan has even suggested they take their partnership a step further. Over Christmas he planted the concept of starting a business together and Duffy is eager to move ahead with the idea.

In S17 E17 Ryan and Duffy discuss their business plans further. An enthusiastic Duffy says she’d like to start up a one-stop baby shop on the internet. She insists with her knowledge of the subject and his business know-how they’re set. He’s anxious that he doesn’t want to let her down but she’s buoyant about the idea. Ryan says if they’re to be business partners they should be partners in life and gets down on one knee and proposes on the spot. Unfortunately, their romantic moment is shattered when Duffy notices the new paediatric nurse attacking a baby in a nearby cubicle and goes to sort out the situation. At the end of the episode, Ryan reminds Duffy of his question and lets her know he’s still waiting for an answer. She says that of course she’ll marry him.

In S17 E18, Ryan takes over as receptionist for the day as Jack is off sick. He struggles with the simplest of tasks and has to be helped out by Nikki who shows him how easy it is. After several attempts, Ryan manages to grab Duffy’s attention. To her surprise, he pulls out an engagement ring and asks her to try it on. Although she’s happy, she tells him she can’t just yet and that she needs to tell people in her own time. She assures Ryan that she hasn’t changed her mind and that the ring is beautiful. Ryan tells her he understands and the pair share a passionate kiss.

In following episodes, Ryan and Duffy are secretly planning their business venture. Ryan’s already secured premises and suppliers but poor Duffy’s so busy she’s seen none of it. But she does promise to write him a cheque to cover all expenses in S17 E19.

Duffy has left her position at the hospital and her dream of starting a business with Ryan is slowly coming true. However, Ryan goes missing. Worried, Duffy contacts the police who ask her questions about Ryan. Duffy slowly realises she doesn’t know a lot about his background. All the money is gone out of Duffy and Ryan’s joint account and heartbroken, she is forced to put her house up for sale. She has a bad time for a number of weeks.

In S17 E30 Ryan unexpectedly returns to the department. A furious Duffy tells him that he ruined her life and can’t believe he dared to come and talk to her. He tells her that he loves her, but she tells him to leave. In S17 E31 he turns up at Charlie’s house where Duffy is staying. Charlie tells him to get lost but Duffy agrees to see Ryan – for a few minutes. He apologises again to Duffy and tells her that all the money is back in the account. He tells her he made a huge mistake – he thought he was conning her but he was conning himself – because he did fall in love with her. He admits that he thought she was vulnerable and thought that it would be easy to steal from her. He tells her he still loves her and wants her – and shows her pictures of a country club in New Zealand. Ryan tells Duffy he wants them to live there together. Duffy says the idea is ridiculous and she doesn’t love him. Ryan comes into A&E and speaks to Charlie. He says that he thinks they both love Duffy. Charlie tells him again to get lost. However, Duffy realises at work that she still loves Ryan despite everything. After a long talk she tells Ryan that she’ll go to New Zealand with him – gives him one last chance. Happy, they share a kiss. Duffy makes her goodbyes and Ryan drives her away.

In this article:Russell Boulter, Ryan Johnson

Avid viewers of The Bill may already recognise the face of Liverpudlian actor Russell Boulter who joins the new series of CASUALTY from Episode... 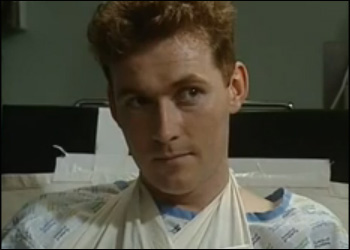 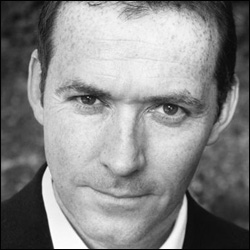