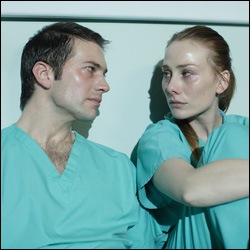 Joseph and Jac are trapped in a cordoned-off operating theatre. They are operating on a man who, they later discover, has been transporting contaminated waste. Locked in the theatre, they declare their feelings for each other.

Meanwhile, Annalese and Michael are colluding over Hewitt’s death. Annalese is still suspicious of Donna, following her affair with Michael.

Mark is worried that Daisha could have post-natal depression. Daisha wants to be left alone but her sister, Lalaine, arrives.

* ‘Out of Nothing’ by Embrace plays at the end of the episode.

In this article:Graham Mitchell, HC Series 11