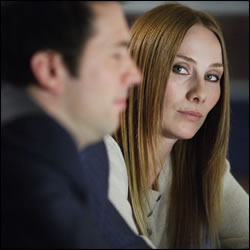 Faye and Joseph’s relationship takes a turn for the worse. Faye takes some time out, while Joseph seeks solace in a bottle. The next morning, Joseph wakes up with a hangover and calls out for Faye – but sees Jac standing in his room, naked but for a towel.

Meanwhile, Maddy is out to impress after she was turned down for the job on Keller Ward. She pushes herself to the limit of her abilities, however, when three children are brought in following a road accident.

Elsewhere, Maria gets a call from Aaron, who is about to leave for a few weeks’ work in Barcelona. Maria is upset as she won’t get a chance to say goodbye. Donna offers to cover for her, but then lets Maria down in order to help Elliot in theatre.

In this article:Graham Mitchell, HC Series 11