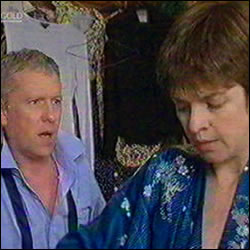 It is the birthday of Anna Cropley and her husband Jerry brings her a cake full of candles, but then he spends the whole breakfast shouting at her and their about ten-year-old son Danny. When Jerry leaves for work Anna tells Danny to pack his stuff as they will be leaving, but Jerry returns as they are mid-packing.He starts shouting and hitting her, until she falls over and is lying on the floor, unconscious. Danny, the son, calls an ambulance even though his father is trying to stop him from doing it. When Josh and Liz come to treat Anna in the flat on the twentieth floor Jerry locks the door after them and does not want them to take Anna to hospital to have x-rays. Josh says that he needs to call control to tell them that they will not bring Anna in, but Jerry starts shouting at Josh, saying he has to give him the radio. Jerry puts a knife in front of Liz’s throat, but they manage to get him to calm down a bit, enough for Danny to be able to knock him out. They quickly help Anna outside and take her towards the lifts, but Jerry does not stay unconscious for long. The lift starts going downwards exactly as he reaches the lift, so instead he goes and turns the lift off, leaving them sitting inside of it in torchlight.

Ambulance control gets worried about Josh and Liz as they have not heard anything from them and they call Charlie to ask if he knows where they are, but Mark reckons they are sitting somewhere eating Chinese to celebrate Liz’s last day at work. Meanwhile Josh and Liz are trying to work out a way to get out of the lift, but soon Jerry is sitting on top of the lift, with a shiny knife in his hands, saying that if Anna is not living with him she is not living with anybody. However, soon Josh manages to get the lift moving and everyone gets out of it, apart from Liz who is still stuck in the lift with Jerry. Jerry is holding a knife at her throat, but when the lift starts moving again and gets to the bottom he pushes Liz out of the lift, at the same time as the police cars are arriving. Jerry goes back up with the lift, trying to find Anna and Danny. They manage to get Anna safely to hospital, but a while later Jerry appears at the hospital, pretending to be her brother. He is threatening Anna, but eventually Liz talks him into giving the knife away and the police take him.

This is also Liz’s last day at work. At first she is planning to travel around Central America, so by the end of the shift Liz asks Josh if he can drive her straight to the train as she does not feel up to going to her leaving do. Josh thanks her for having been there when he lost his family and then she leaves.

Ellen Weakes is a 67-year-old woman who is brought in with asthma, which soon gets better. She proudly explains that her son is a bank manager, but later on when Harry Duncan, a patient lying in the cubicle next to her, asks she says that he is a sports promotor. Harry and Tina realise that she has been saying different things about the son and Harry says that he thinks that the son is a figment of her imagination. Harry himself has had a small stroke and does not want to listen when everyone tells him that they want to keep him in for observation. Later on Baz finds his cubicle empty and Sunny finds Harry collapsed in the toilets and there is nothing that can be done to save him.

Baz and Charlie are getting ready for their holiday in Australia, but Elliot is still trying to ask if Baz could postpone her holiday as he had counted on Jack Hathaway being able to cover for her, but now that he has gone they do not have anyone to do that. He also tells that Hannah Thomas’ sister will not be pressing charges. Instead she will get a written apology and Hannah a memorial bench outside the hospital. Elliot says that it would look good if Baz stayed, but eventually Elliot says that he is asking her as a friend, to which Baz replies ‘Why didn’t you say so in the first place? In that case I’m definitely going’. Elliot begs Charlie to have a word with Baz about staying, but Charlie says there is no chance for that because Baz is having a really bad day. Later Charlie asks Baz to sign Liz’s card and she signs it without saying a single word to Charlie. After a while she says that she decided not to start resuscitation with Harry Duncan, asking Charlie is he is ready to take the blame if she got it all wrong. Charlie understand that she is upset about the whole thing with Jack and finally tells Baz that Jack’s girlfriend Jayne left him and that she was pregnant. Bas says that Charlie should have told her in confidence. Eventually Charlie says that he does not see any reason why he should be going on holiday with her. By the end of the shift Charlie starts regretting what he has said and comes home with a bunch of flowers and a bottle, but he soon realises that Baz is not at home, having left Charlie’s flight ticket for him on the table.

– Anna Cropley, 30-year-old woman who gets knocked out by violent husband, who does not want her to be taken to hospital

– Harry Duncan, an older man who thinks nothing is wrong with him, but later on dies of a heart attack

[Josh is lying in bed. He is awake and decides to check what his alarm clock says; 05:29. He gets out of bed and walks to another room, where Liz is packing her bags.]

Josh: I need to do breakfast then. One egg or two?

[Josh walks into the kitchen to make her breakfast.]

[Charlie comes home from work with flowers and a bottle of sparkling for Baz.]

Charlie: It’s me! Sorry I’m a bit late, but I’ve got a little something for you. I couldn’t claim I paid something for them myself, but… Baz? Baz? Come on, enough’s enough, we’re on holiday now. Fresh start on the wire. Baz?

[No one is home and Charlie soon finds his flight ticket on the kitchen table and puts it into the pocket, walking away leaving the flowers in the kitchen.]

– This is Liz’s last episode as she leaves to travel around Central America.

– Josh gives Liz a watch as a leaving present, so that she will not be late while travelling.