Ric wants to put his admission to Michael about his cancer behind him. Meanwhile, Annalese wants answers as to why Ric suddenly dumped her, but he avoids being honest and tells her to go back to Michael.

Ric realises he needs to face up to his cancer and hands in his resignation to Mark. Performing one last operation, Ric collapses in theatre – it’s up to Michael to save him.

Oliver doesn’t want to be a burden to Greg but his desire to please him results in Oliver overstretching himself medically. When Connie finds out that Greg left Oliver unsupervised, she is horrified. Oliver tells Greg he covered for him – Greg doesn’t know that Ollie has got him in trouble.

After a shift trying to achieve the impossible – an empty ward – Jac finally accepts Sacha as her friend.

In this article:HC Series 12, Justin Young 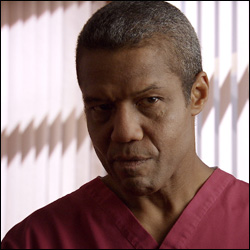