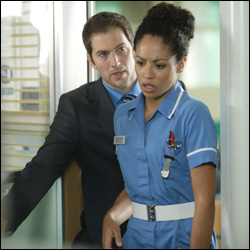 Joseph tries to focus on work rather than on Faye’s suspension but, when he suggests Lauren’s slapdash nursing is responsible for Archie’s death, he is accused of bullying and threatened with suspension by Vanessa.

When Joseph explains his theory that Archie died after being given potassium, it becomes clear that Lauren may actually be the cause of Archie’s death.

Elsewhere, Michael is determined to keep his Holby vision on track, but Vanessa lets him down by hiring a locum who isn’t trained in robotic surgery. Michael ends up losing the robotics suite, along with his faith in Vanessa.

Penny, meanwhile, wants to shine while on the acute assessment unit but is sidelined when Scott is re-admitted.

In this article:Andrew Holden, HC Series 12