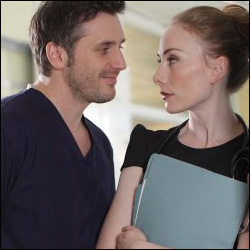 Ric rallies the troops against Hanssen when the latter instructs that all Upper GI cases should be transferred to another hospital. Unwell with cancer, Ric fights on to save his livelihood but, when Hanssen learns he’s dying, he offers to save his life by removing his tumour.

Elliot’s efforts to keep a controversial patient’s case from Hanssen goes awry and he creates waves when he mistrusts Jac, thinking that she was largely to blame for a patient sawing his hand off on her watch. But it’s not long before the tables are turned on him and he is stuck in the middle of a storm.

Jac’s fierce ambition to bag the consultant’s job gets her into trouble when she goes above Sahira’s head by going into theatre with a young patient. When the patient dies on the table, Jac has a lot of explaining to do.

In this article:Graham Mitchell, HC Series 13