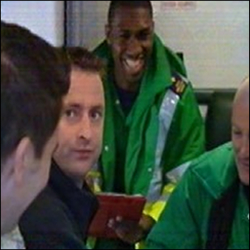 Josh and Finlay are transferring Michael, a burns patient, to another hospital about an hour’s drive away. Tom and Barney go with the patient. They discuss how it happened – apparently Michael was found in his flat, which was on fire – the police suspect he set his flat on fire as an act of suicide. His dog was also in the flat, which Tom is concerned about, but Josh tells him the dog has been taken to the pound. The ambulance gets on its way, but soon come up against a traffic jam. They find out that it’s caused by a lorry which has overturned and is blocking the road; they have to decide whether to wait for the police to clear it or to take a long diversion via a B-road. Initially Tom decides they should sit it out. As they wait, they start talking about women. Tom says he’s hopeless – he can’t do all the small talk. They discuss what they look for in a woman. Tom suddenly looks at the patient and tells Fin to take the B-road. They carry on their discussion, and Fin tells Tom there are plenty of fit women at work. He mentions Colette, joking, and Josh doesn’t look happy. He goes on to talk about Chloe, and asks Tom what he thinks. Tom says he’s already seeing someone, saying the reason they didn’t know is that he likes to keep his private life private.

Fifteen-year-old Casey and his much older girlfriend Ruth are living in a cottage with no electricity; it’s lit by candles. Ruth is eight months pregnant. She keeps getting pains; Casey says they’re probably false contractions but Ruth doesn’t think so. Suddenly her waters break. Casey wants to get help but Ruth reminds him that they planned a natural birth, with Casey as midwife. Casey says that things are complicated because it’s premature. He insists on going to find someone, and leaves Ruth as he goes to the car. The car won’t start so he runs out into the road, looking for help. Fin is driving the ambulance along the same road; he sees Casey in the road at the last minute, and swerves but still hits him. The ambulance carries on and ends up crashing. Michael’s tube is dislodged by the accident, and Tom and Barney get to work quickly to re-intubate him. Tom, uptight, yells at Fin, blaming him for the accident. One of the tyres on the ambulance has burst. Fin contacts control and finds out that another ambulance will take thirty minutes to arrive; he decides to change the tyre himself as it will probably be quicker. Josh goes back to look for Casey; when he finds him he yells at him for running out in front of the ambulance but eventually listens enough for Casey to tell him about Ruth. Josh takes him back to the ambulance, bumping into Fin. They decide Fin should go with Casey to see to Ruth while Josh stays with the ambulance. When Josh tells Tom, Tom is angry, reminding Josh how ill Michael is and saying they can’t hang around. Josh reminds him that it’s his ambulance and his responsibility, adding, “And you don’t have to tell me how to deal with a burns patient!” He goes outside to change the tyre. Barney later goes out to ask him how much longer he’ll be; he asks Josh if Tom knows about his family dying in a fire. Josh tells him not to make excuses for Tom. Barney says Tom just likes to be in control; Josh says he understands.

Eventually the tyre is replaced and the ambulance is ready to go. They try to radio Finlay but can’t get through. They decide they can’t wait any longer so they set off. On the way, Michael goes off. Tom inserts a needle into his chest to help him breathe, but blames himself for not noticing earlier. Michael arrests. They need to shock him but Josh says they have to stop to do so – otherwise they risk electrocution. Tom reluctantly agrees. Josh pulls over, and Tom shocks the patient, but with no result. Barney tells Tom that Michael’s gone, but Tom won’t accept this. He continues cardiac massage and they set off again, and get to the hospital. Michael dies, and Tom is obviously upset. Josh tries to tell him it happens to them all, but Tom won’t listen. Josh gets him some tea, saying he thought Tom could do with it. Tom blames himself for Michael’s death, but says all he can think of is Michael’s dog. Josh tells him he lost his family in a fire, and says that he remembers that with every burns patient, and makes a special effort. Tom says he’s sorry for blaming him; he says he feels like dirt. Josh says it wasn’t his fault; Tom asks why he feels so bad then.

Fin goes with Casey towards their cottage, making comments about how young Casey is, and assuming that Casey’s girlfriend is also a teenager. He’s shocked when he arrives and sees how old Ruth is. As he examines her, she tells him that Casey’s not just a kid; Fin says that’s exactly what he is. Ruth tells him they love each other and want a family. She has another contraction; Fin looks below, and sees that a foot has emerged. Fin puts in a drip despite Ruth’s objections, saying she’ll need it to replace the fluid she’s losing. After more contractions, during which Ruth forgets about her plans and takes some entinox, some of the baby’s body has emerged, but the umbilical cord is being squeezed. Fin reassures Casey, who panics at this news, that the baby can stay like that for up to ten minutes. Eventually the head emerges, and Fin congratulates them – it’s a boy. He wants them to go to hospital, but Ruth and Casey don’t want to go. They tell Fin that they’re hiding from Casey’s parents who are after Ruth’s blood since Casey and Ruth told them about their relationship. Fin tells them that their baby could die if he doesn’t go to hospital. They know Ruth could end up in prison if Casey’s parents press charges, but they say they’ll get through it. Fin sends Casey out to flag down the next passing vehicle to take them to the hospital. Casey goes. As they are waiting, Ruth talks more about her relationship with Casey. Fin says that he dealt with the situation really well today; he seems to condone the relationship but says he doesn’t. Casey returns with a man driving a hearse. They’re taken to hospital. Tests are done and the baby is found to be normal. The doctor assumes Casey is the baby’s brother, but Casey tells her the baby is his son, and kisses Ruth.

Fin joins the others, and tells them about the baby. They tell him that Michael didn’t make it. Discussing the baby, Barney says it’ll probably end up in care. Fin tells him to give it a break. Barney asks if he condones it, and Fin tells him he had to be there. He tells them that the baby will be called Michael. They get into the ambulance to return to Holby.

In this article:Cas Series 15, Len Collin 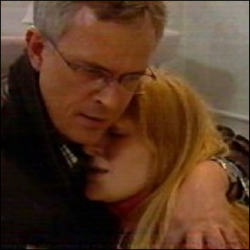 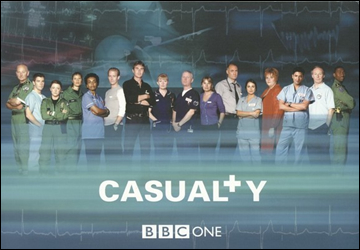