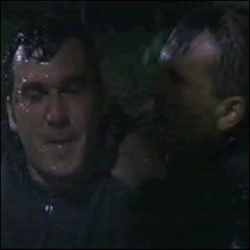 Greg discovering Patrick’s affair with Rachel, fights with him in CRASH. After it is broken up, Charlie not knowing the circumstances wants to press charges, whereas Jan thinks Patrick should keep a low profile. The police question Patrick over Rachel’s death.

Comfort and Nikki are called to the a pub, where regular schizophrenic Al has locked himself in the toilets. A group of football fans crowd the toilets, and Nikki kicks one of them who tries to kiss her. While there, a coach of fans crashes into the pub, Patrick goes to the scene to help with the many injured, including driver, Brian – who in CRASH suffers a heart block. Philippa and Lara disagree on keeping in A&E, Lara thinks they don’t have time to wait and pacemakes him in Resus, saving his life. Terry, is also brought in with pelvic injuries and a dislocated hip replacement – he refuses morphine, while the team put his joint back in place. As the football fans enter A&E, Jan decides the only way to keep them happy is to bring down a TV so they can watch the match in reception. In the pub, schizophrenic Al is trapped in the pub with a man, Woody, who has a pool cue through his chest. They have trouble moving him, until Al reminds them the cue comes in two halves which can be taken apart. In A&E Woody thanks Al and makes friends with him. Angela is also brought in with an arm injury, and breaks up with her boyfriend when he’d rather watch the game than go with her to x-ray.

Three woman, Karen, Sandra and Liz come in – Karen is suffering from nausea and sweating – and throws up over Jack. They are all on a diet including no alcohol. Karen reveals to Liz that Sandra was sleeping with her fiancé – Liz goes into the toilets and drinks vodka. She is also then taken sick. Lara and Chloe discover their sickness is caused by eating wild mushrooms – and drinking alcohol with it. When Sandra reveals to be going on a date with Jack that evening, they don’t tell her what caused their illness!

Lara invites Patrick to her friend’s cottage to relax. While she is in the bath, Patrick goes out to collect wood for the fire – Greg, however, has followed them. They fight, and he takes Patrick to a lake, and tries to drown him.

* Woody – pool cue through his chest.

* Girl – trapped in coach, comes in with her Dad.

* Panto dame who has sat on a tea pot.

Patrick is in CRASH with Rachel, Greg enters;

Greg : You gave me all that caring doctor stuff

Patrick : I don’t know what you’re talking about

Greg : And all the time it was you! You.. (goes to fight with him, Dillon behinds him calls the alarm)

Greg : So what were you gonna do, run away and play happily families?

Patrick : It was over between us!

Greg : Don’t you lie to me! (puts Patrick under water)

Greg : She finished it? No, you didn’t even want her did you? You make me sick! (puts his head under water again)

Greg : Listen pal, I don’t care about me, my life is over (head under again) and now so is yours! 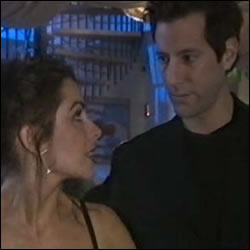