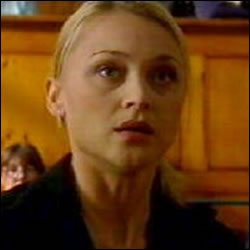 It’s the day of the verdict of Lara’s trial and she admits to Dillon that she has yet to tell her family of her predicament. When the sentence of three years is passed, Lara goes into shock and looks to Dillon for support. With events happening so quickly, she is clearly overwhelmed and her journey in the prison van is slowly reminding her of life to come. While her possession are being searched by the prison officer, she grabs back her photo of Patrick as they try and take it from her. As she later tries to adjust to the cold four walls of her cell, the tears finally come and she lies alone weeping on her bed.

Nikki receives a bravery award but refuses to be portrayed as a hero by the press and declared Lara the real hero. She doesn’t lose the opportunity to say that if their ambulance bosses supplied the paramedics with stab vests then she wouldn’t have been put in the situation. Jeff, although keen for Nikki to raise the profile of the ambulance service, hurriedly blames lack of resources and walks away.

Hanna comes into A&E with her sister Sonia. She has recently had a pulmonary embolism but refuses having a transfusion because she is a Jehovah’s Witness. When she collapses, Simon ignores the fact that she told him and helps Sonia cover his story, so as to save her life. When Hanna comes round she is furious. Sonia realises that although she survived, she has lost her sister already.

A 4 year old boy, Alex, comes into reception, telling Jack his mum is ill. Jack and Ryan find his mother in the car park unconscious after suffering a diabetic attack.

Josh and Finn take a call to a woman who has hurt her ankle. As they take her down many flights of stairs, Josh nearly loses his balance. He’s unhappy when Finn decides to call for back up to help.

An old date of Simon’s comes into A&E and slaps him round the face – Harry warns him not to bring his personal life into work. Josh is also less than happy when he catches Simon and Colette practising dance moves. And with Dillon spending more time with Lara, Heather becomes increasingly jealous and is not afraid to tell him. Simon continues to watch her from the sidelines and is still waiting for his moment with her.

* Hanna Guzman – after a recent pulmonary embolism, she needs a blood transfusion

* Woman – with an ankle injury

Dillon : Have you eaten anything?

Dillon : Well you got through the trial, the worst is over.

Sonia : We betrayed her

Simon : We saved her!

Sonia : And I lost a sister

(In prisoner, Lara looks around her cell and starts to cry)

In this article:Cas Series 17, Leslie Stewart 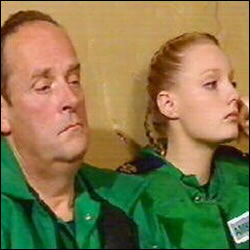 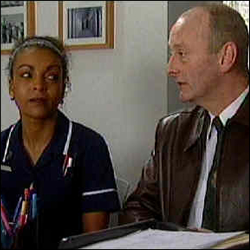 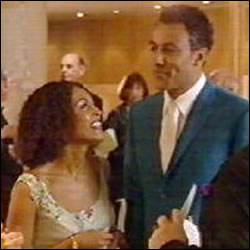