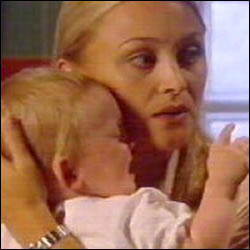 Comfort, concerned about the state of Colette’s marriage, has confided in Fin. But she’s strongly counselled him to say nothing to them, reiterating you can’t interfere in other people’s marriages. Presumably this is a lesson he’s already learnt… Meanwhile in A&E, Donna, a nurse from the paediatric ward, arrives to help out and within minutes Simon spots her. Colette’s snappy towards him, clearly she’s finding it difficult to put their rendezvous behind her.

Ryan and Duffy, meanwhile, are becoming increasingly close. They’ve obviously shared a happy Christmas and Ryan has even suggested they take their partnership a step further. Over Christmas he planted the idea of starting a business together and Duffy is eager to move ahead with the idea.

Colette unfortunately overhears an eager Simon trying to arrange a date with Jane, who he met in a casino last week. She’s obviously hurt and suggests he wasted no time in moving on to the next woman. Josh, on the other hand, is really trying to make things work. He manages to grab a reluctant Colette and suggests a night out at her favourite restaurant. Colette snappily says she’s not in the mood and walks off. Josh puzzles over what surprise he could plan that would please her.

Anna’s planned to go on a blind date at lunch. Sadly, he fails to turn up but she does have better luck with the man at the next table. His name is Merlin and he invites Anna to join him for a drink. Is Anna’s luck with men about to change for the better? Colette seems definitely down in the dumps. She has yet another run-in with Simon and tells him she feels like she’s falling apart, like her marriage.

Nikki’s eager to take a look at the swish surroundings of Jack’s dad’s flat but it’s clear she’d prefer his dad was out. And it seems all is not well at the flat. Jack’s dad is paid a visit by a couple of heavies who dole out a vicious beating. When Jack arrives home he finds the flat and his dad in a bad state. He tells Jack this is just the beginning, he’s in debt to the wrong man.

Lara has a perplexing case involving a young baby. She’s unable to work out what an earth could be wrong and slowly begins to suspect the baby’s mother of being responsible for his discomfort. She instructs Roxy to watch the mother when she’s alone with her baby. But Duffy is annoyed to see Roxy’s time wasted and orders her away from her post.

Before Duffy can leave the darkened room she’s joined by Ryan. The pair snuggle and then begin to discuss their business plans. Duffy says she’d like to start up a one-stop baby shop on the internet. She insists with her knowledge of the subject and his business know-how they’re set. He’s anxious that he doesn’t want to let her down but she’s buoyant about the idea. Ryan says if they’re to be business partners they should be partners in life and proposes on the spot.

Unfortunately, their romantic moment is shattered when Duffy notices the new paediatric nurse attacking the baby – it was her all along. She rushes in and saves him in the nick of time. The nurse tries to deny it but when Ryan rushes in, supposedly with video evidence, she cracks. Harry congratulates Lara on her excellent instincts.

Jack’s dad tells Jack he’s going to rip off a dodgy deal to get the money to pay his debt. He says he’ll understand if he just walks away but Jack says they’re family and their problems are shared. And Duffy’s about to expand her family, she accepts Ryan’s offer of marriage. She wants to make a new beginning, professionally and personally, and she wants it to be with Ryan.

Colette arrives home to find Josh has a surprise for her. Josh has decorated their home and planned a menu all in a Cuban theme. He’s very pleased with himself especially with his top trump, a holiday for the two of them in Cuba. But Colette destroys the moment when she blurts out to Josh that she just can’t do this anymore. She tells a stunned Josh that their marriage is over and runs out sobbing. Josh is left alone amongst the debris of his Cuba night.