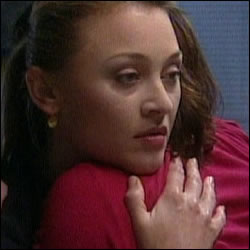 Tally, who is still recovering in hospital, breaks down when Lara visits her. She apologises for her behaviour, and Lara advises her to sort things out with Harry – but Tally believes he is blaming her for her mother’s death. Harry, realising he’s been neglecting Tally, persuades her take a holiday with him. In his absence, Jim will take on the role of clinical director.

An angry father blames Abs for his child’s death, having seen his picture in the paper after the epilepsy incident. The father lashes out and leaves Abs unconscious in a pool of his own blood.

Roxy is given a scare when Julie leaves her a message at reception. Fearing the worst, she rushes to see William, only to discover that he has come off the ventilator. Roxy is not in a forgiving mood and tells Julie not to call her again.